On Friday, Internet reports surfaced from a website called Sparty and Friends that Coach Pete was going to be the next head coach at Mississippi State University. We freaked out and started sending emails like this to people:

I'm dying over here. Can you imagine if this is true? Holy cow, I think I'm hyperventilating. I just need to get my thoughts out: Anger. Shock. Upset. Amazed. Bewildered. Confused. Sad. Heart racing at a thousand beats per minute.

What does this mean for the future? Is this report even true? I'M HAVING A FREAKING PANIC ATTACK HERE. Good grief, I need to pull myself together. Is Bryan Harsin next in line? I was picturing national championships and opportunity and undefeated seasons for the next four years. Now this? GOOD GRIEF I JUST GOT A HUGE SHIVER UP MY SPINE, AM I GOING TO BE PARALYZED BY FEAR OF THE UNKNOWN? Probably. This is huge. This is big. I need to take a break for a second.
The report was terrifying because we feared it to be true. Sparty and Friends claimed to also be the ones who broke the Lane-Kiffin-to-Tennessee story, which wouldn't have convinced us all on its own to believe their Coach Pete version were it not for the fact that OBNUG-fave website Deadspin also picked up the rumor and reported it as fact. That was enough for us to get our heart rate up to a dangerous high and to start maniacally refreshing KTVB.com for an update. 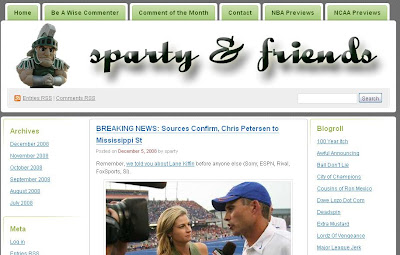 And we know we weren't alone. We Bronco fans lived and died together in the comments section of our coaching rumor post. It was terrifying. It was tense. It was the worst four-and-a-half hours of our life.

And we blame Sparty and Friends.

All afternoon, they stood by their "source," and claimed virtually on their mother's life that their story was true. It's not like they were trying to pull the leg of two entire states; they honestly thought they had reported a fact.

Had they not been so strident about their belief that they were right, we might have realized sooner that Coach-Pete-to-MSU made no sense, that there were a million reasons why he would stay in Boise over taking that job, that WE WERE PLACING OUR FRAGILE PSYCHE IN THE HANDS OF A BLOG. Never again. Except for FAIL blog.

Sparty and Friends were wrong - completely, utterly, totally, tragically wrong. And they are not even sorry.

Chris Petersen, the head football coach at Boise State, issued a statement in regards to the rampant rumors that he was leaving the university for Mississippi State University. You just cannot trust blogs, Kirk Herbstreit and Chris Mortensen for breaking news.


In their "apology" post, they never specifically say that Petersen has denied that he will be taking the head coach position at Mississippi State. They don't take responsibility for screwing up royally, choosing instead to essentially say, "Look, Chris Mortensen does it, too." They even go so far as to imply at the end of the post that they could still be right since a coach has not, in fact, been named at MSU yet.

If we used swear words, we imagine now would be an appropriate time to break them out. In lieu of that, DOGGONEIT! What a bushleague response from an increasingly bushleague website. We really hated that they got us all worked up for nothing, but we would have at least been okay with it if they would have felt sorry for doing so. Instead, we got an apology laden with boastfulness, disrespect, and a picture of the Michigan State mascot holding his hands up in the air.

And to think, we have only scratched the surface of this debacle. Allow us to dig a little deeper to see just how massive Sparty and Friends' mistake has been and will be.

As a blog, we take great pride in our position opposite traditional media. We relish the opportunity to have our voice heard and to make an impact, and some of us even dream of the day that we can be taken seriously by people we didn't room with in college. Sparty and Friends just put that day even farther off.

Their blowing this report provided a reason for thousands of people to belittle and demean blogs all over again. These people have pointed to the fact that this rumor took flight on the Internet as a direct correlation to the Internet being a bunch of hooey. How are blogs supposed to be taken seriously when they adamantly support facts that aren't even true? How are they supposed to keep stealing readers from real news sites when they won't accept responsibility for their own mistakes? So what if Sparty and Friends thinks their mess-up puts them in the same company as Kirk Herbstreit and Chris Mortensen. Newflash: no one takes Herbie and Mort seriously anymore, either. And now, thanks to S&F's shenanigans, no one will take blog news seriously for awhile.

Add to that the psychological impact of these lies on Bronco fans. We have been burned before by a coach who said he would stay, only to head out of town for a better offer. You think those memories didn't manifest themselves on Friday? Part of the reason why we believed Sparty was that this has happened to Bronco fans before, and it is in our nature to assume the worst when it comes to our coaching.

But even more seriously, we are in big trouble down the line thanks to this Mississippi State fiasco. We went from the lowest low of Coach Pete leaving us high and dry to the highest high of his declaring that he was going nowhere. He issued a statement saying he was going to stay, and in so doing, he may have changed the expectations of our entire fanbase all over again.

Dan Hawkins ruined us for other coaches. Coach Pete may have saved us, and that may be the most dangerous part of this whole unfortunate series of events. When Coach Pete said he would stay, we could sense our emotions turning; we could sense ourselves beginning to foster a false sense of security that he'll be here forever.

He won't. He's going to leave at some point, and we can only hope that he will be more honest about it when it happens than some of his predecessors were. And when he does leave, no matter the terms, we are going to be crushed. We are going to be in denial, then doubt, then depression, and it could be worse than we ever imagined. Coach Pete staying will make Coach Pete leaving all that much harder.

Thanks to Sparty and Friends, we already saw him go once. We don't know if we can stand to see him leave again.