Share All sharing options for: Huzzah: The NCAA Gamecube Playoffs are here! 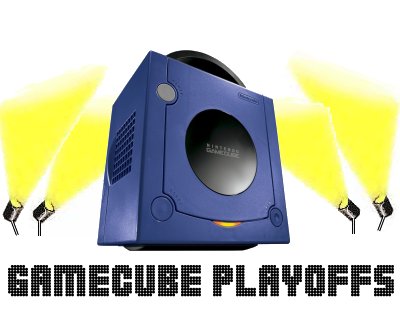 The gamecube. Is. That. HERO!

Fed up with the mess of the BCS, we have decided to hold our own impromptu college playoff to decide who should be the just and true college football champion, and we're going to hold said playoff the only way we know how: with outdated technology.

We'll get to the method in a second, but first, let's explain the field. We feel strongly that the most fair and equitable way for college football to go to a playoff is to include 16 teams and each conference champion. You're welcome, Buffalo. Then, after the 11 conference champs are chosen, the next five highest ranked BCS teams should be added to the mix, and everyone should be ranked according to their spot in the BCS standings. It makes sense to us.

Here's what we came up with for the bracket:

You'll notice we did not fiddle with the numbers to avoid rematches (Utah-TCU, for example). As Britney Spears would say, "That's our prerogative."

And now to the method: The gamecube has solved many of our problems before (most of which involved not having girlfriends), so it seemed like a natural fit to settle the case of college football injustice. And since we already had a college football game kicking around, it couldn't have been more perfect (and cheap). Carson Palmer hasn't been out of football that long, right?

Yes, we are using NCAA Football 2004 to settle the NCAA football debate of 2008. Each game will be simulated in order to avoid personal bias and Boise State's Ryan Dinwiddie throwing for 700 yards every game. The results will be tallied each round and posted here at OBNUG. We hope to have the whole thing wrapped up before bowl season hits, but we'll see how it goes.

Here's to justice! And a convenient excuse to keep the gamecube in the living room for another week.