Do you believe in miracles? Yes! BSU wins it all

Share All sharing options for: Do you believe in miracles? Yes! BSU wins it all

A dream is a wish your heart makes, when you're fast asleep. And we have had the following dream/wish every night for the past two months (click for a larger view): 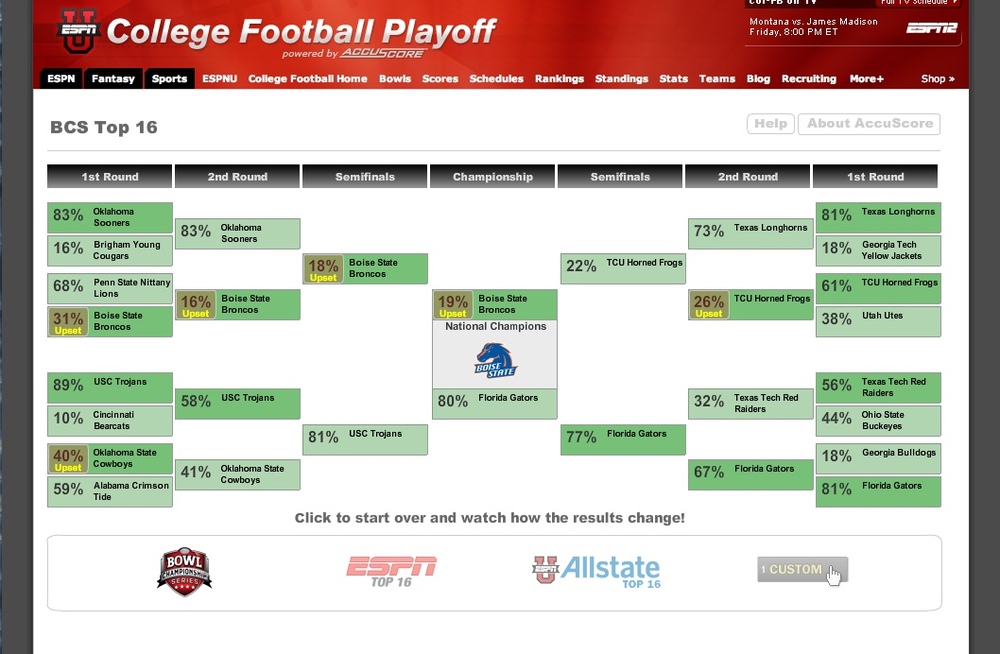 ESPN's bowl simulator says so; therefore, it must be true. This Cinderella story was sent to us by OBNUG reader Huey, who was touched by the hand of destiny on his first try with ESPN's bowl playoff software. His first try! It took us two hours and calling in a Photoshop favor to get the same result.

Huey created the bracket using the BCS standings (now there's a novel playoff idea), and then held on for dear life as the next 15 seconds rocked his world and the worlds of Boise State fans everywhere. First up for the Broncos was an upset over Penn State. Next was a Fiesta Bowl rematch with Oklahoma. In the semifinals, the Broncos took down USC, and in the national championship, they defeated Florida. Penn State, Oklahoma, USC, and Florida - we'd like to see Ohio State try that!

ESPN's bowl simulator goes to show that anything is possible, which is why a college football playoff would be such a good idea. Can you imagine if this scenario had played out in real life? We would have been in cardiac arrest starting in the quarterfinals and going straight through recruiting season. It would have been the best month of our life!

Instead, we'll just have to dream about it. Our heart's making wishes, and at least for a minute or two, it was nice of ESPN's bowl simulator to humor us.