It's almost hard to believe that Fresno State was one of the most talked about teams in the preseason and was chosen by virtually everyone to win the WAC, especially when you consider how far they have fallen since.

Actually, no it's not. Fresno does this all the time.

But for some reason, this year's precipitous fall from BCS buster to broken-down and busted seems so much worse. Before the season began, people were literally claiming that the Bulldogs were one of the best teams in the country and that they and BYU were veritable shoo-ins for Top 15 or Top Ten finishes.

Now? No one will even own up to picking wrong on one of the biggest disappointments of the season.

Perhaps these people need a refresher course on how Fresno State went from ranked preseason to possibly, maybe, hopefully making the New Mexico Bowl. Here is that refresher course:

Boise State, on the other hand, rose steadily all season long by doing what no one really gave them a chance to do: win all their games. Wait, wasn't that supposed to be Fresno's job? 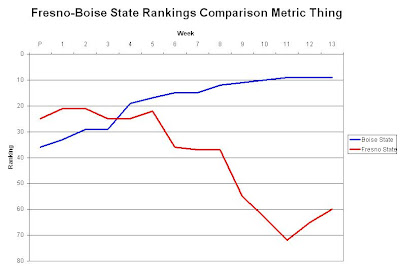 As you can see, the numbers don't lie. Even Microsoft Excel thinks Fresno State was horribly overrated in the preseason.

Can we get Microsoft Excel a job as a sportswriter? Just throw in some macros and some conference records from the past 10 years, and even a computer program would have known to stay away from picking the Bulldogs. The precedent was staring everyone in the face. Fresno State has not lived up to expectations for years, and there was no reason to believe that they were going to start now.

We saw this coming. So did virtually all of our readers. How could no one else? When you pick teams to be successful in the preseason, you have to consider more than just the roster and returning starters, otherwise we would have Georgia as a preseason No. 1. OK, bad example. The point is that there are a lot of factors that go into what makes a team successful, and Fresno State has yet to show that it can handle all of those factors.

Maybe next year? Try not ranking them in the preseason and then we can see.