Slim Pickings: Change we can all get behind

Share All sharing options for: Slim Pickings: Change we can all get behind

Politics are a sticky matter. A political debate can easily ruin the mood of a party. Emotions flair and tempers rage all over stuff that probably won't affect our day-to-day lives. Your thoughts on Obama aside, I think we all know the guy knows how to make a splash. On Election Night Eve, he did a rather mundane, cookie cutter interview with Chris Berman on Monday NIght Football. Well, mundane and cookie cutter until he threw this little nugget in. Yep, he just hit on the most controversial sports issue of our time, a college football playoff.

At the time, I think most of us brushed it off. I mean, this was a guy that we'd all seen numerous times now doing what he does best - public speaking. I figured this was just another calculated and well thought out move to tug on the heartstrings of the American people. I laughed it off, said "well done, sir," and tried not to get too excited. That was all until the past Sunday in his interview with 60 Minutes.

Finally, a politician that didn't just make a promise pre-election and let it fall to the wayside after he'd won. This interview was on 60 Minutes, I remind you. I think the last time I saw sports mentioned on 60 Minutes was maybe the Dennis Byrd story years ago. There was no reason for him to expound on the question. He could have easily blown it off, but there he was laying out his "plan" for a college football playoff. He'd obviously put some thought into this.

Deadspin had a great post up earlier this week on how a college football playoff could work. It's much more pro non-BCS than even I had hoped. Basically, the six conference champs from the BCS schools would get in, plus the top two ranked non-BCS schools. And, yes, that would include Notre Dame, too. No more special rules for them. As Mr. Clay Bennett so eloquently puts it:

This isn't 1940 and tiny Midwestern private schools don't get to call the shots for the entire country anymore. Join a conference and shut up.


I couldn't have said that any better myself.

Of course, many people are coming out and decrying Obama's comments and saying that he's got more important things to worry about than a college football playoff. That's true, but how much time could this take? Just drop a few cryptic statements here and there and threaten the NCAA with some anti-trust lawsuit. It's not like he needs to have a three-day summit with the college presidents or something.

Also, let's stop this whole "the BCS is better for college football than a playoff" nonsense. If this was truly about the game, people wouldn't be making a big deal about it. But it's not about the game, it's about the money.

Let's get to the games. I was hoping last week's lack of good matchups on paper would lead to some upsets. Yeah, that didn't happen. 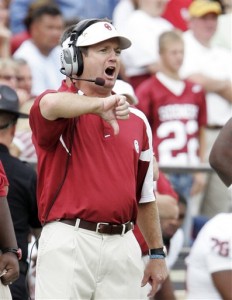 I'm really surpised to see that Okahoma is giving 7 points to Texas Tech this week. Texas Tech has been dominating. They've proven that they can score at will against anyone they've played. Is Oklahoma's defense better than Texas'? Maybe. I still don't see how there's any way that Oklahoma will cover this. I've got too much faith in Mike Leach (plus, I really enjoy when his name is thrown around for the big time coaching positions instead of Coach Pete's).

Ah, the game we've been waiting for. Another "marquee" Mountain West clash that nobody will see. Yes, this game will be broadcast on The Mtn., which means you'll have to trek to a sports bar or a friend's house that has satellite. For some reason, Comcast can be a freaking sponsor on their website but can't carry the stupid network down here in Nashville. Apparently I'm only supposed to want to watch teams from my region. Aren't we at a point with technology where we should be able to access any game that is televised? If I can do this through the internet, why can't I do this through my TV? This makes no sense to me. Also, if Utah finds a way to escape this game, give them a stupid BCS game. They would have earned it. I do think, however, that BYU will be playing spoiler.

Michigan State has climbed up to No. 15 this week. Did this surprise anyone else? I was curious how this happened, so I checked out their schedule. They have not beaten a single ranked opponent. They lost to their only ranked opponent (Ohio State) and to a disappointing Cal team. Good thing they play in that tough Big 10 though to boost their strength of schedule. I think Penn State wins this game, but 14.5 points seems too high.

Fresno State gets tuned up for their "Biggest Game of the Year" next week with a game against San Jose State this week. Fresno State is coming off an uninspired win over New Mexico State last week. San Jose State has lost two straight to Louisiana Tech and Nevada. This is really a toss up. When in doubt, I've learned to never trust Fresno.

Louisiana Tech has a nice little three-game winning streak that started with their upset of Fresno State. This is a direct correlation to the benching of Taylor Bennett. New Mexico State continues their tailspin to nowhere. Who else had Hal Mumme first in the office pool of WAC coaches to be fired? Brent Guy was a huge upset.

Idaho ends their season with their own mini bowl game with their trip to Hawaii this year. It's a good thing that Akey has the mustache to protect his upper lip from those harmful UV rays. We all know Idaho is going to lose this game. I mean, half those kids probably haven't seen the ocean before. The question is by how much will they lose? 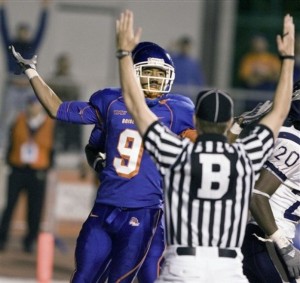