Share All sharing options for: Not a precision passer: Nevada QB Colin Kaepernick

Isn't it a bummer when facts get in the way of clever headline alliteration?

Not for ESPN.com's Mark Schlabach it isn't. The college football guru threw facts out the window in his latest installment of his weekly column "On the Mark." Nevada QB Colin Kaepernick was the beneficiary. 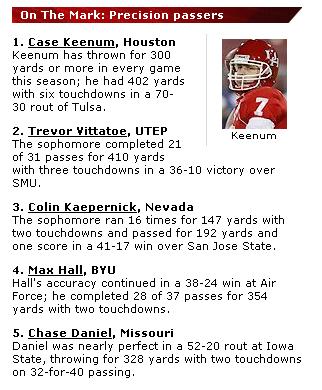 Here it is again for the image averse:

The sophomore ran 16 times for 147 yards with two touchdowns and passed for 192 yards and one score in a 41-17 win over San Jose State.


Poor Mark Schlabach. He seems to have confused running backs and quarterback again. You see, for Kaepernick to be considered a "precision passer," he should probably be able to pass with precision. Is this not inherent in being a precision passer?

Yet instead of passing precisely in the Wolf Pack's game against San Jose State last Saturday, Kaepernick passed aimlessly, hitting on less than 50 percent of his throws. In fact, Kaepernick has not completed more than half of his tosses since October 11 in a game against New Mexico State.

So let's recap: Colin Kaepernick was named to Mark Schlabach's precision passer list for completing 48 percent of his passes.

Looks like Nathan Enderle is a shoo-in for next week.