The price is right! Michigan fan for sale on Ebay

Share All sharing options for: The price is right! Michigan fan for sale on Ebay 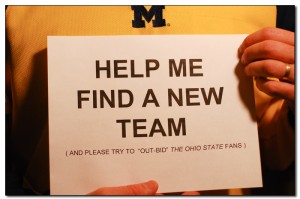 A very astute OBNUG reader, Kyle, gave us a heads up on the following item. Some of you may have heard about the Michigan fan selling his fandom on eBay. Well, we here at OBNUG want your help in making a bid.

You can check out the auction here. A few of the things he's willing to do are denounce Michigan, provide video of himself burning all his Michigan apparel, and fully become immersed in his new team. He's even going to give 60 percent of the winnings to a charity of the winner's choosing.

It's too good to be true.

Here's our plan. Below you will find a donate button to a PayPal account we've set up. We are asking you to donate one or two dollars to the cause (FYI: PayPal takes the first 30 cents of a donation as a "fee"). If you feel led to give more, we won't fight you with that. However, with our hundreds of faithful readers, we think that we can easily raise and surpass the current bid of $182.50 from some NC State fan. Besides, Phillip Rivers went to NC State, and he's a doofus.

Any money that we raise beyond the winning bid will be given to the same charity as the one used in the eBay auction. Also, if we don't raise enough money to win, all the money will be donated.

So, what do you say? I'm sure we can all spare $2 for a noble cause and probably convince five of our Boise State brethren to do the same. The auction ends November 27th at 7:40 MST, so let's get on it!