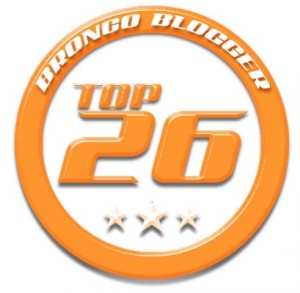 Everyone who had Week Eight in the pool for when someone would vote the Broncos into the Top 10, come claim your prize. And everyone who had OBNUG's Kevan being the guy who voted them there, congratulations on knowing how to read his obviously biased hints.

Here's the thing: there are only ten undefeated teams remaining in the country, so wouldn't it make sense that those ten undefeateds should be in the Top Ten? It's too perfect not to make sense. OK, granted, Tulsa and Ball State probably don't deserve such lofty billing, but there's no reason why Boise State and Utah can't cram themselves into that top tier courtesy of their unblemished records.

It was for weeks like this that we created the Top 26 poll in the first place. Take that, Craig James!

For more details on how the rest of Kevan's and the other bloggers' polls looked, feel free to visit the Top 26 Poll homepage or download the Top 26 Poll pdf. It makes for great dinner conversation.

This week's poll of choice belongs to Nevada blog, Pistol Whipping the WAC. We admire his restraint in not putting the Wolf Pack in the Top 25.

Well, college football appears to be somewhat chaotic week in and week out. I really thought that Missouri had an unstoppable offense (wrong) and that Oklahoma was going to beat a Texas team that I obviously did not give enough credit to.

I had been trying to not fall so far into the trap of just picking teams to move up after they win, but instead who I really thought was the better team. I really think that Saban is a good coach and was surprised at how 'Bama thumped the Dawgs, so I'm moving them up to No. 1. And Colt McCoy seems to have more moxie than I give him credit for so they go to No. 2.

I still think USC will be in the national championship game and they are my No. 3. Penn State, you don't go into Camp Randall and RUTS on Wisconsin like that unless you are for real.

The rest of the teams I just have to go on gut feeling. It's looking like BYU and BSU are the top two non-BCS threats to bust this year. Could this be the year that Michigan State doesn't choke?