What happened last week? The WAC I knew, the one that I had all put away in a box in my mind with each team falling in their respective places and doing just what I expected of them, it all came crumbling down.

I was about to start gloating about how I'm killing Phil Dailey against the spread (not to mention this guy, too). But now, I'm not feeling so confident.

To recap, Hawaii beat Nevada on the island (even though they allowed 308 yards on the ground!). Fresno State almost choked away a game to Utah State, a game that remarkably had zero turnovers. And the unthinkable happened when Idaho got off the schnide with a win over New Mexico State with Idaho holding the Aggies scoreless in the second half and the Vandals winning it on two field goals. What happened to the WAC that I knew so well? At least Boise State remained the predictable stalwart they are.

Let's all hope that our expectations and the reality of this WAC can get back in order this week.

I was really expecting Texas to blow Oklahoma State out last week in order to help clear up this logjam in the Big XII. Now, with Oklahoma State hanging with Texas, Vegas has no choice but to assume that the Big XII might really be as good as the rankings say, hence the 4-point spread. This game will be a shootout, and the more points scored means the margin of victory will likely be higher. No way Texas loses now, right? 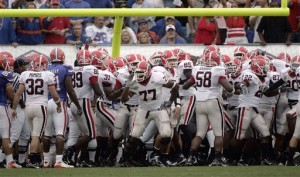 I think this week is Georgia's last stand. They went into this game last year off a bye week and sort of surprised the Gators. Now Florida is looking for revenge. I'd still take Florida here if they were double digit favorites with the way they've been playing the past few weeks. No way Urban Meyer lets off the gas after the stunts Georgia pulled last year.

Was I worried about BYU running the table? Sure, they had an explosive offense and seemed to get their close game out of the way early. Am I worried about Utah running the table? No way after I saw that ugly game against Oregon State. If you've got Graham Watson defending you by pointing to a win over Michigan as a marquee win, you've got problems. I'm thinking those problems start rearing their ugly head this week. I'm thinking the Lobos stay within a TD.

Fresno almost lost to Utah State. I don't know what to think of them anymore. I'm going to go against my normal thinking and figure this is about the time Fresno turns it around and starts gearing up for the Boise State game. 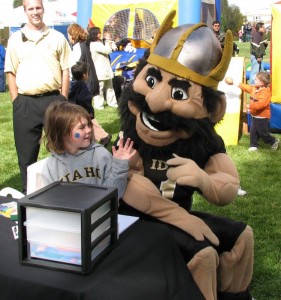 When I finally got to my hotel room in Brooklyn this past Friday, I flicked the game on to find the score a little closer than I was expecting. I didn't realize it until later that Boise State had done a lot of the damage to themselves. I do have to give the Spartans credit for their effort, though. Could this week be a trap game for SJSU to travel all the way up to Moscow, Idaho, to play in that cesspool they call a stadium? It very well could be, but that isn't going to make me pick Idaho. Good thing I only have Monopoly money riding on these picks.

Let's see, Hawaii traveling to Utah to play in cold weather against a Utah State team that almost beat Fresno. Maybe I'm overthinking this, but I'm fully expecting McMackin to go into full fledged hypothermia if he tries drinking cold Coke on the sideline. I'm really disappointed in the firebrentguy.com guy, too.

I told myself I'm not going to be picking the Broncos as 20-plus point favorites anymore. They just aren't the same type of team that we've come to expect out of Boise State. They aren't averaging 35 points a game. They prefer to win the game on the defensive side of the ball. Then Vegas goes and tempts me with this spread. I can't do it. I'm sticking with my initial decision. Now watch Jeremy Avery and D.J. Harper rack up 100-yard games and make me look foolish (in fact, I'm kind of hoping for this).