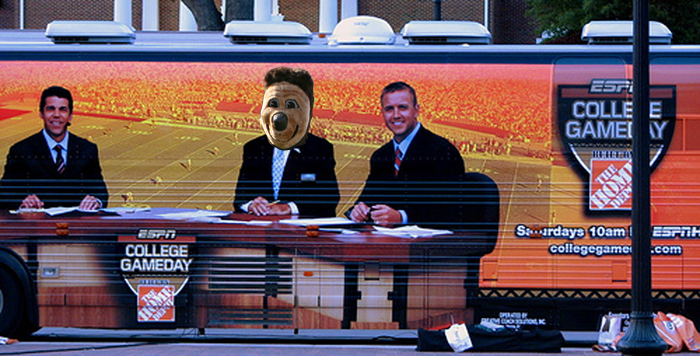 There was some huge news this week in Nashville. Gameday is coming to town for the Vanderbilt - Auburn game. This will be the first time Gameday has been at a Vanderbilt game in Nashville (not surprising?).

I had really hoped that my first Gameday experience was going to be the Boise State vs Fresno State game back in 2004. Fresno State was coming off big wins versus Washington and a No. 14 Kansas State. Fresno then pulled the Fresno-special and dropped their two preceding games leading up to the matchup in Boise. The luster of the two ranked mid-major teams was gone.

So this will be my first experience. I need your help. If I'm going to show up at the butt crack of dawn, it had better be for a good reason. I need to make a sign. What should my sign be? Should I be trashing Graham Watson for her bandwagon jumping? Should I be poking fun at Lee Corso's lisp? Should it be a simple and understated Boise State logo? (Actually, I can't draw so unless I can track down transparencies and an overhead projector, that one probably won't work.)

On to the picks. Last week had its ups and downs, but I was right about Georgia (we can forget about the TCU pick).

BYU picked a good year to go undefeated. All the BCS conference opponents on their schedule suck, the rest of the MWC conference is helping them out by beating up on Pac-10 teams, and top teams are falling. Can Utah State help out the WAC? Unfortunately, I don't think their win over Idaho is going to be a launching point for their season.

The other MWC darling faces off against the Pac-10 cinderella. Oregon State comes off their huge win over USC and travels to Utah to take on a pretty good Utes team. Normally, I'd think this would be a classic letdown/trap game, however, Oregon State has had an extra few days to calm down and prepare for Utah thanks to the Thursday start of the USC game. I don't know if Oregon State can win, but an 11.5 point spread is awfully high. I'm looking for Oregon State to keep it close.

1984 was the last year that Vanderbilt was ranked. That lasted for one week. This year's ranking has lasted for two weeks due to a bye. Things are looking up. Auburn played LSU tough but I just can't look over that 3-2 game versus Mississippi State. Auburn will try and play a physical, grind it out game, and Vandy can win that game.

I hate the Big 10 (I do make exclusions for Illinois). They are overrated and slow. Tradition means nothing if you suck. As much as I hate Ohio State, there's a reason that they've gone undefeated the past two years in the Big 10 -- they're the best overrated, slow team in the Big 10. I do think that Terrell Pryor's speed will cause Wisconsin issues.

USC has played about one game each year where they've been unmotivated and unfocused and lost to a less talented team. I think it's safe to say that game was last week. I was hoping that Oregon would be able to sneak out a win in this game, but I just don't see how a porous pass defense like Oregon showed against Boise State can match up against a USC team that will be coming out hard.

If a team's only win comes against a I-AA team, is it still a win? That might be a question Idaho fans are asking themselves at the end of this year. I mean, it must be tough to build a program when former career 11-35 coaches are being plucked away for NFL jobs.

Fresno State, I hate you. You get all the preseason love. Every once in awhile you get a big win over a BCS team. You also never cover for me. Now I'm faced with a dilemma this week. Do I go with a smart pick considering that Hawaii can't decide on a quarterback and the games in Fresno? Why must you do this to me?

The game that took forever to get here. I must admit, as much as it sucks to sit around on a Saturday with no Boise State game to watch, it was a nice midweek surprise to wake up this morning and think "We've got a game today!". Note to Gene Bleymaier, this little bit of jubilation does not make up for having to rearrange weeknight plans or having to continually answer the question from friends "Who does Boise State play?" with "We're not playing today. We're playing Wednesday/Thursday/Friday." Anyways, about the line. Earlier this week, it was hovering around 22 points. Now it's popped up to 24.5. I'm going to have to stick with my head here and realize that Boise State has yet to cover as a favorite this year. Until this changes, I'm going to have to go with my head.