Graham Watson jumps the shark, no sharks left to jump

Share All sharing options for: Graham Watson jumps the shark, no sharks left to jump 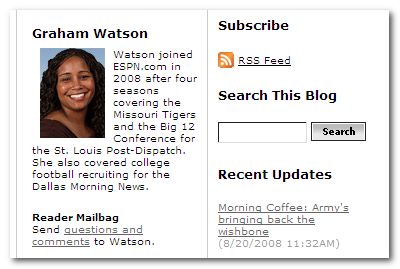 As ESPN's non-BCS blogger, Watson has a lot on her plate, like keeping track of 54 teams and reminding people that she keeps track of 54 teams. It appears that the pressure is getting to her.

OBNUG reader BlueTurf is one of many members of Bronco Nation who keep Watson accountable to things like knowing how college football works and not constantly putting the same team down week in and week out. With this in mind, he passed along Watson's chat transcript from yesterday afternoon, and boy, is it a doozie.

As Brian Fantana so kindly said to Champ Kind, "Take it easy, Champ. Why don't you sit this next one out, stop talking for a while."

Brian (Maumee, OH): If Boise State and Utah both go unbeaten, could the determining game for who goes to a BCS bowl actually be the Civil War of Oregon at Oregon State?

Graham Watson: You know, that's a good point, but I think the determining factor will be that Utah will have beaten three ranked teams to be undefeated. TCU, BYU and Michigan (ranked in the preseason coaches poll). Boise State would have beaten one.
Grahamie!

We didn't know that preseason rankings figured so prominently into the discussion of strength of schedule at the end of the year. If this is the case, then Maryland must be feeling pretty good about its win over Clemson. Ditto Colorado over West Virginia.

Mike (Obnug, ID): Ms. Watson, do you really consider Utah's win over Michigan a win over a ranked team? Last I checked they have a losing record.

Graham Watson: Hey, the coaches saw fit to rank Michigan in the preseason. I thought it was ridiculous, but it still goes down as a win over a ranked team.

Adam (Boise): Weak Graham! using the preseason poll to justify UTAH is ridiculous and I think you know that! Only BoiseState has a win over a current top25 team of the non-BCS unbeatens. come on now!

Graham Watson: You could throw 100 arguments out here. Utah has two wins over BCS schools, one that beat USC. Utah still has to beat two ranked teams to be undefeated. Its conference is tougher than the WAC. And Boise State played the third, fourth and fifth-string QB for Oregon, and the fifth-string threw three touchdowns in a near comeback. I'm just saying if you want to point out weak talking points be careful what you wish for.

Adam (Boise): Geez, I think the main post you missing is Boise has the win over a current top25 team. last I checked Oregon's only losses are to USC and BSU. Who has't beat michigan? near comebacks don't count BSU did it and from most of the media it will never be enough. There is alwasy an excuse as to why BSU isn't this or isn't that, 5th string QB and all I mean it gets old, and UTAH will be exposed like BYU against a team that can play D.

Graham Watson: Why would Boise State's win over a current Top 25 team count more than two wins over current Top 25 teams, one of which is ranked higher than Oregon? Again, excuses could be made either way. That's why this year is shaping up to be one of the most controversial ever. There are like four teams that could have a legit beef with the BCS when it's all said and done based around the same discussion that we're having right now. Who's to decide one win over a certain team that's not No. 1 is better than the other? This is a no-win argument.
Watson also took time during her chat to lump the Cotton Bowl in with the other BCS bowls and to claim the SEC is the best conference in football because they "beat up on each other week in and week out." We cringe to think what her weekly picks will look like.