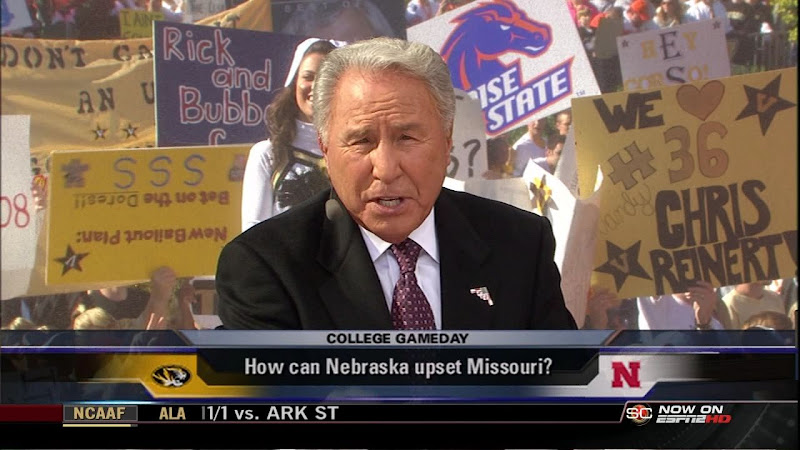 Wednesday, when I asked for sign suggestions for ESPN's Gameday, I wasn't sure what to expect. I was thinking maybe a clever Boise State sign involving sharpies and poster board. However, when Drew of Fight Fight BSU pointed me to a Boise State logo I could blow up, I started to get excited. Friday I picked up my sign and it dawned on me this was actually coming to fruition.

I wasn't sure what to expect from Vanderbilt fans. They're known for their apathy due to being the perennial doormats for the rest of the SEC. I arrived at Vanderbilt at 6:30 a.m. and the line was already pretty long. I was a little nervous so I kept the sign pretty much covered up since I didn't want to deal with too many people that early in the morning. There were some Texas fans in line behind me who eventually noticed it, and they started telling me how much they enjoyed the Fiesta Bowl. Vanderbilt was handing out free shirts and Chick-fil-A was handing out free sandwiches. Props to Gameday for this. At 7:00, they opened up the gates and started letting us in.

The way Gameday was set up is that there is an "inner circle" which puts the fans directly behind the stage, then there is a walkway that separates the inner circle from the rest of the fans. The line I was in was for this inner circle. As I got to the screening area, where ESPN checks the signs, a security person told me that I wouldn't be allowed to take the broom stick that I had so carefully attached to my sign the night before into the inner circle. That sucked, but at least I was in. At some point they closed off the inner circle, which really helped since it wasn't packed and I was able to move around and re-position when necessary.

A couple of minutes before they went on the air, Fowler talked to the crowd. He explained how they had been many different places in the SEC but that this was their first trip to Vanderbilt. He then went on about what they were going to be doing on the show and how they were going to have a segment with BYU's Bronco Mendenhall. At this point, I lifted my sign and he looked surprised and then acknowledged it. I was able to catch Herbstreit's attention and pointed at my sign, and he just smiled and nodded. Not sure how this will affect his AP ballot yet.

I was a little worried about my placement since I was about 10 people back and there were a lot of other signs in front of me. However, by the time they got on the air, I knew I was in business. I had a couple things working in my favor. First, I'm tall - about 6'5". Second, I was working with a slope. Third, my sign stood out among the hand-drawn signs. Lastly, they had a huge Jumbotron set up that was showing us the broadcast. As soon as I would see the shot they were using, I was able to quickly adjust and get the sign in the shot. I was going to have Kevan on the phone spotting for me, but that wasn't needed (ed's note: Kevan still dutifully got up at 8:00am on a Saturday because he's a good friend).

All in all, I was able to pretty much get in a shot with every person. I was getting text messages and calls from all my friends saying that they could see it easily. I even met a Vandy student from Boise. Her parents had called her because they saw the sign on TV. Of course, she was a Bronco fan.

Thanks for everyone who got screen shots from the broadcast. We've got a selection below. I encourage anyone in future Gameday cities to keep it up and represent Bronco Nation in the future.

(Click on any of the pictures to view OBNUG's College Gameday photo gallery.)