Vote Kellen Moore for Davey O'Brien; no one else is

Share All sharing options for: Vote Kellen Moore for Davey O'Brien; no one else is

The Davey O'Brien Award, which is handed out annually to the best college quarterback in the nation, is currently holding fan voting to decide three nominees to be added to the award's semifinalist list. The only problem is that the fans, up to this point, have really dropped the ball.

Moore, who just so happens to be the best college quarterback in the nation, has received exactly one vote for the Davey O'Brien Award.

He currently sits in a tie with such other luminaries as Wyoming's Dax Crum, Oregon's injured Justin Roper, Army's Carson Williams, and Washington State's "To Be Determined." We wish we were making this stuff up. 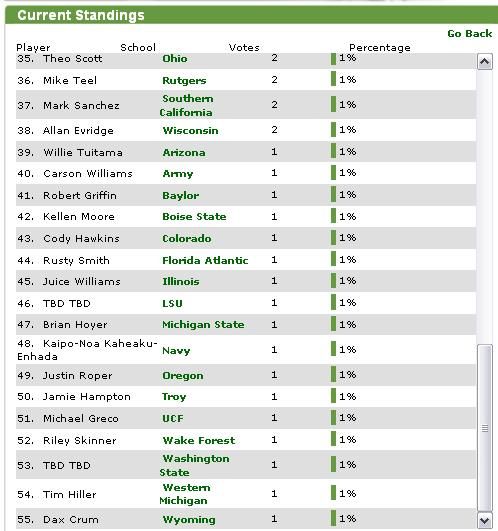 Some of the quarterbacks ahead of Moore on the list make the situation seem even worse. West Virginia's Pat White has 34 votes, Arkansas's Casey Dick has 64, and "Touchdown (or turnover, depending on his mood)" Tommy Brandstater from Fresno State has 428.

Currently sitting in third place in the Davey O'Brien standings?

None other than Chase Holbrook.

Fortunately, there is still time to right this horrible oversight. Head on over to the Davey O'Brien award page and sign-up for an account so that you can help Moore climb the rankings. Let's at least get him past Mike Teel. Once you fill out your email address, password, and personal information, you'll be sent a confirmation email. And in that confirmation email, you will be told that a second, more confirmatory confirmation email will be sent after 24 hours have passed. Click on the link in that second email and, provided you still remember what it was you signed up for in the first place, you'll be all set to vote like mad for Kellen's cause. Oh, also, you can only vote one time per day. This Davey O'Brien guy was not very tech savvy.

Voting closes on October 26th, so there is still an entire month to build up Moore's votes. And even if Bronco Nation doesn't get Moore into the top three in time, at least there will still be a minor victory amidst the Davey O'Brien disappointment: Nathan Enderle wasn't even an option.