Every Thursday, OBNUG contributor Nick will pick the winners of a handful of Bronco-centric games, using nothing more than his encyclopedic knowledge of college football and good, old-fashioned intuition. He picks against the spread because he hopes to one day be a deadbeat gambler. Now might be a good time to point out that this column is for entertainment purposes only. 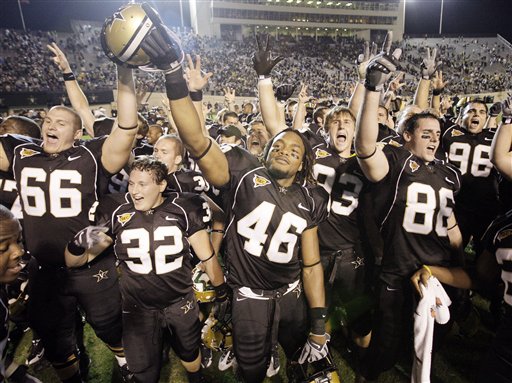 Going to a Vanderbilt game differs from attending a Boise State game. You end up worrying about things that never even cross your mind when you're on the blue. Is the game going to be sold out? Will there be more opposing fans than Vanderbilt fans? If Vanderbilt does take the lead, how long until they collapse?

These are things that never even cross my mind when I'm lucky enough to attend a Boise State home game. Walking into Bronco Stadium, there's always a confidence that surrounds Bronco fans, albeit sometimes bordering on cocky. It's always fun to try and find some opposing fans and take part in a little good-natured heckling. I've missed all this.

Last Thursday night at the Vanderbilt game, things were different. The pregame mood was more festive. I had thought it was due to fans just looking for another reason to drink (I had assumed that the guys in front of us had spiked some Coke, but when they got a refill at halftime, I realized they were drinking about a half full sprite with the rest filled up with liquor). I thought maybe it was due to ESPN being in town or Erin Andrews on the sideline. But the fans acted different. When Vanderbilt fumbled on their half of the field leading to a South Carolina touchdown, nobody seemed to get down. Eventually when Vanderbilt did take the lead, there wasn't the sense of impending doom. I had gone into the game hoping that Vandy would only lose by 10, but I left missing Boise State home games.

Plus, it's always nice to see Steve Spurrier making this face, right? 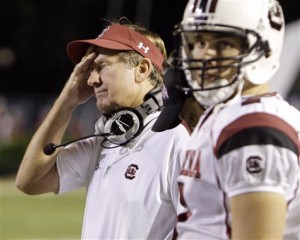 Taking into account my recent bad luck with Boise State away games (Washington and Georgia), I'm doubting whether or not I should go to the Southern Miss game.

Onto this week's games and the return of Boise State football.

The hard part about picking WAC teams out of conference is finding a decent line. We all know that Nevada will lose to Missouri, but 26.5 points is a lot. Will Missouri pull Chase Daniels in the second half with a sizeable lead and take their foot off the gas? It's possible but not probable, right?

Finally a decent line involving a WAC team and an out of conference opponent. Fresno had a week off to properly prepare and overcompensate for their BCS foe. Wisconsin had a slow start last week falling behind 14-0 to Marshall before scoring 51 unanswered points to close the game. This will be Wisonsin's first away game. Combining that with Pat Hill's history of being able to motivate his guys properly for a BCS team and also my firm belief that the Big 10 is terrible, I think the WAC will see it's first upset of the year (No, Louisiana Tech, I'm not counting your win over Miss State).

And we're back to lopsided spreads. Where has Nebraska been the last couple of years? It seems like they show up every once in awhile with a new coach and a little hype only to get slaughtered by a good team, ala USC last year. This will be New Mexico State's first game this year. Yes, it's Week 3. I have absolutely nothing to base this pick off of except for their 4-9 record last year (ed's note: and the Air Raid offense being the Air Raid offense).

The Greg McMackin era is off to a roaring start. After the expected beatdown by Florida, Hawaii had to come from behind against Weber State (at home no less) with the return of their prodigal son Tyler Graunke. Oregon State hasn't looked good in their first two games losing to Stanford and Penn State, but I'm sure this game will be their turning point.

Shouldn't Idaho be a directional school like Northern Idaho? I think using the full state name should be reserved for schools that aren't embarrassments to the state, at least in athletics. I've heard great things about their agriculture program, but unfortunately the University of Idaho is more known nationally for being the Vandals. I think it's time that they were renamed appropriately. Oh, and go Broncos! Even if they're from across the country. I understand the strategy behind scheduling this year. Have an easy game up front to get everyone's legs under them, take the next week off to make adjustments, and then come out ready to play the third game. But, that was just a cruel trick to play on us fans. To have the taste of Boise State football and then to have that withheld for two weeks? That should make this game all that more satisfying. Bowling Green let me down last week after their Minnesota game. Coach Petersen may have an issue with winning by more than 42 against and in-state opponent, but I don't think a 16.5-point spread should be an issue here. It is Jeremy Childs' welcome back party and all.