Share All sharing options for: Slim Pickings: one yard short of perfection

Every Thursday, OBNUG contributor Nick will pick the winners of a handful of Bronco-centric games, using nothing more than his encyclopedic knowledge of college football and good, old-fashioned intuition. He picks against the spread because he hopes to one day be a deadbeat gambler. Now might be a good time to point out that this column is for entertainment purposes only.

Boise State's off this week. I'm hoping they are running extra sprints for not covering the spread Saturday against ISU. And, by they, I mean Coach Petersen for failing to run one more play from the goalline at the end of regulation. One measly yard was all that stood between me and a perfect week one. This only hurt more as I saw Kevin Craft turn into Joe Montana during the second half of the Tennessee - UCLA game on Monday night to not only cover but win outright.

This week, the slate of games includes some more WAC teams taking on BCS foes. Unfortunately, I think the division between the haves and the have-nots of the WAC will become more pronounced. On which side will Louisiana Tech fall? I'm curious to see. 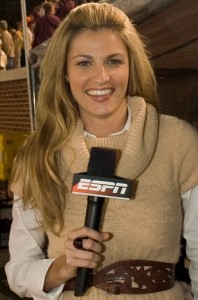 There's a few things you should know about me. I live in Nashville. I have Vanderbilt season tickets (only $99!). And I would love nothing more than to see the red-headed step child of the SEC beat one of the traditional powerhouses. This isn't quite that game, but Vanderbilt did beat South Carolina last year. Vanderbilt has changed their mind on QB again this year and will be back to the athletic Chris Nickson. I'm cool with whatever decision they make as long as it leads to 6 wins and a bowl game. Tune into ESPN tonight to see if more Vandy fans show up in Nashville than South Carolina fans and, of course, to admire the work of Erin Andrews.

Bowling Green is coming off a semi-upset of Pittsburgh. Minnesota is coming off a win last week against Northern Illinois, equaling their win total from last year (1-11). I'm sure they're still trying to recover from the loss of Laurence Maroney and Mario Barber. Boise State's next opponent looks poised to go 2-0 this year against BCS teams. Hello, strength of schedule!

Southern Miss will have its first shot at an SEC team this week. Can they replicate what Louisiana Tech did? Mississippi State did beat Auburn last year, but I think both programs have gone in opposite directions since that meeting.

Utah State picked up where they left off last season with a loss in their first game. Oregon took care of Washington last week with a 34-point win even with new starting QB Justin Roper going down with a concussion. He's expected back under center this week, and I see no reason why Oregon wouldn't score even more points. Here's hoping they believe all WAC team defenses play like Utah State's and take a few weeks off.

New LaTech QB Taylor Bennett didn't exactly light it up in his first outing (15-for-40!), but LaTech did come out with a win over an SEC opponent that not many other WAC schools can say. Unfortunately Mark Mangino's squad is much larger than Sylvester Croom's. And, yes, I mean that in more ways than one.

Colin Kaepernick definitely had a Kaepernick-esque game last week going a mediocre 10-for-17 for 122 yards and 1 INT while also racking up 6 carries for 51 yards and 3 TDs. Nevada's pass defense will be tested for the first time this year when they face Texas Tech. I'm predicting they will fail...miserably.

Ok, that line is unverified. I can't find a site that is even listing this game. Either that's because the betting has been so skewed that they pulled the game or because nobody cares enough to bet on it. I'm going to go with the latter. Idaho gets 3 points for being the home team, but aside from that, I'm guessing it would pretty much be even odds. I mean, Idaho is close to returning to I-AA as it is. In a few years, this could be a huge rivalry. In keeping with our theme for this week, I have to go with the cute and cuddly Bengals.