Mike Prater not in the business of helping BSU

Share All sharing options for: Mike Prater not in the business of helping BSU

There is homerism, there is objectivity, and then there is whatever Idaho Statesman sports editor Mike Prater does.

Prater, who maintains a vote in the AP poll, put the Broncos at No. 20 this week, effectively giving the entire school a giant middle finger. Thanks for the vote of confidence, local newspaper editor.

Through the beauty of pollspeak.com, we have the facts on just how inane Prater's poll really is. There were 51 other polls that had the Broncos ranked higher. Fifty-one! Prater put the Broncos behind eight one-loss teams, including a not-terribly-good Virginia Tech. Here are the sordid details: 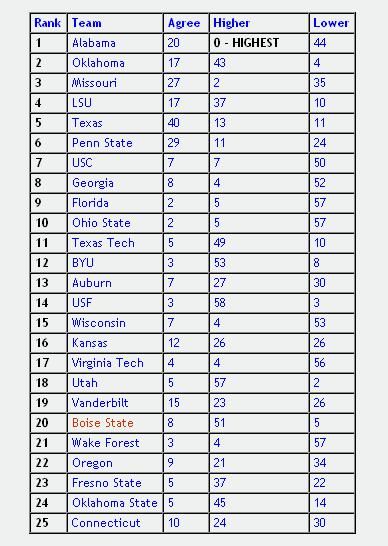 Now, if Prater were the sports editor at pretty much any other newspaper, we would not have a problem with this poll. But Prater is the sports editor at the Idaho Statesman, and as the representative for his local team, he is absolutely atrocious. If the El Paso Times news guy can rank the Broncos at No. 9 overall, then Prater can at least bump Boise State into his top 15.

But what can you expect from a man whose heart bleeds dirty, Vandal gold and who hoards golf visors like they're going out of style (update: they already did - in 1989)? Prater's most recent slight is just one of many of his slights to the Broncos over the years, and we are sure there will be far more in the future.

Chadd Cripe is a saint by comparison.