Share All sharing options for: Idaho State still losing to Idaho on FOXSports.com

Perhaps the biggest highlight from their Saturday loss at the hands of Idaho was WR Eddie Thompson's 17-catch afternoon. In fact, Thompson's performance was good enough to even sneak his name into honorary Heisman contention on FOX Sports' website.

The only problem is that FOX Sports doesn't really know who Eddie Thompson is.

Here's what they wrote for Thompson's nomination.

In a losing cause, Idaho State WR Eddie Williams caught 17 passes for 120 yards and a touchdown in the 42-27 loss to Idaho.
And here's the picture they used. 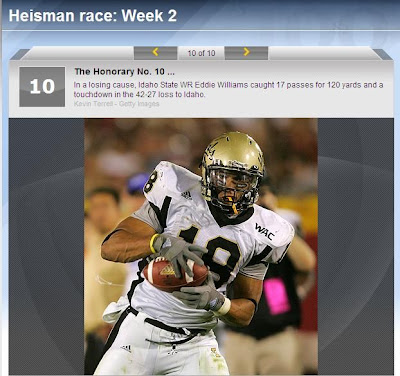 FYI, FOX Sports: Eddie Thompson and Eddie Williams, despite having the same first name, are not the same person.