BSU vs. Oregon: the live-blog to end all live-blogs

Share All sharing options for: BSU vs. Oregon: the live-blog to end all live-blogs 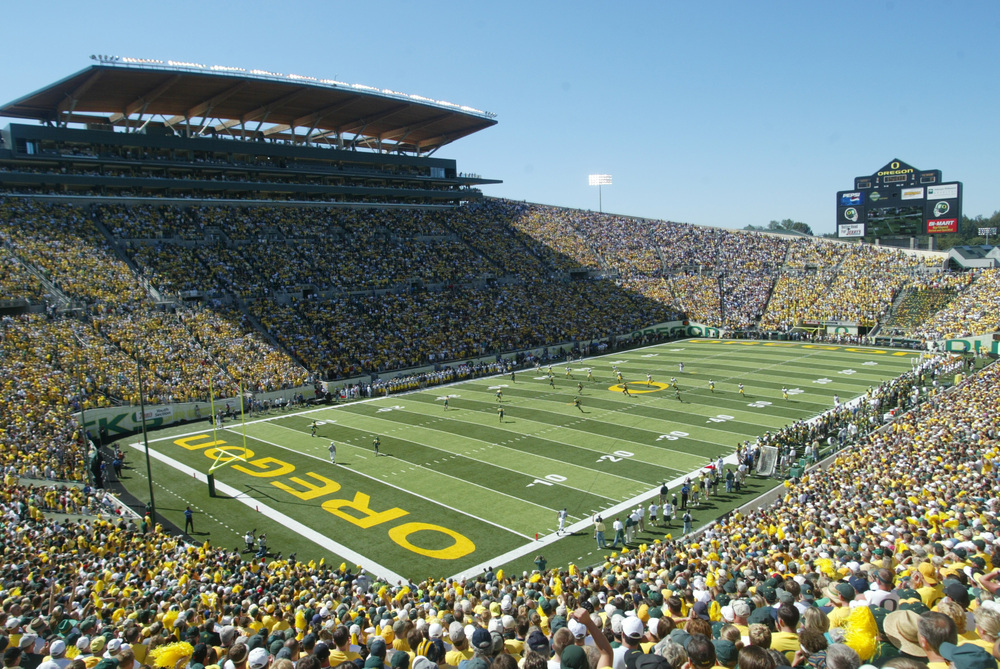 Welcome to the official OBNUG live-blog! Refresh this page for constant updates, and feel free to leave comments throughout. Enjoy!

Pregame: Ok, I'm trying to get BroncoVision up and running. If anyone has a picture up, let me know.

I'm coming to you from Nashville today. Kevan, your regularly scheduled liveblogger, has work obligations today. I've never heard of anyone scheduling anything during a big Bronco game in Idaho, but I guess there's a first for everything.

I should also mention that I'm watching the game with my friend, Jason, the only Oregon fan I know here in Nashville. His wife, Joy, is an Alabama fan but we won't get into that.

Ok, BroncoVision is up. I was about to start cussing.

15:00: Kickoff. Decent return from Ian. Things are looking up. I'm trying to be an optimist.

14:44: Vinny's going to need to start catching passes. 3 and out wouldn't be good here.

The O-line has held up well in the first series. Didn't look like Oregon was blitzing much. Moore looked comfortable in the pocket. Could be much worse for a first series (see: Georgia 2005).

Masoli gets the nod at QB for the Ducks. Let's see if all this confidence from Oregon fans in their backup QB's is unfounded or not.

11:44: Roughing the passer call on Ellis Powers. I'm okay with this. Try to rattle the young QB.

9:25: Was that Taylor Tharp? File that under images I don't need to see during this game.

8:15: Chris Harper enters the game for the first time.

6:27: Masoli's back in and picks up 9 yards on a rollout run. I'm pretty sure only 2 passes have been attempted today from Oregon. Not sure why the Broncos aren't loading the box more.

And BroncoVision just went down. This is ridiculous

Ok, I'm back. Oregon picks up close to the first down on another predictable first down.

3:12: Masoli completess his first pass (I think) of the day for a first down to the TE.

2:45: Blount takes it over tackle for the TD. Now we're going to have to watch it on ESPN Top Plays this week. Suck. Luckily Oregon tried that stupid "swinging gate" thing on the 2 point conversion and failed.

Good things on this drive for Boise State: nice Jeremy Avery run, a pass interference for Titus Young, and a screen pass to Brockel.

Of course, that gets negated by a sack.

14:19: 3rd an long after 2 losses on running plays and what do you know? Another freaking running play. About time the defense reacts. Ducks punting.

What? Are they saying that punt went 3 yards? And Ian Johnson was pressuring again? I could get use to this.

11:51: Moore finds Childs for the first down to the 10. First and goal. That punt won't go down as a turnover in the books, but it should. Huge game changer.

10:53: Moore finds some guy I've never heard of before for the score!


That was Tommy Gallarda for the score. Tommy, I will never forget your name. Well done, sir.

I was really waiting to see what the Oregon punter was going to do for an encore, but I'll take the fumble. I'm not complaining or antyhing.

Kellen Moore finds Jeremy Childs deep in triple coverage. It's great to have Childs back. They're taking a look at this. I like how Mark Johson referred to the call last week versus Bowling Green and how we learned that there has to be irrefutable video evidence to overturn a call -- or bad TV coverage of the game. Call stands.

8:05 Ian Johnson goes off tackle for the score.


So far, Masoli is 3 of 4 and Harper has not even attempted a pass yet. It looks like Boise State's defense is starting to key on this.

6:30: Iloka comes up with a big hit on yet another run play from Oregon

6:03: Harper attempts his first pass on a rollout on 3rd and 8. Good pressure and it's incomplete.

4:45: Good pressure on Moore and that will force an incomplete pass and a 3rd and 12.

Moore steps up into a hit a and finds Childs for a first down. He is so composed in the pocket. It really is amazing for a redshirt QB.

Moore finds Efaw over the middle for a huge gain on 4th down. First and goal from we'll say the 5.

1:53: Moore finds Chris O'neil for Moore's 2nd TD pass on the day. Great playcall. I think Mr. Mo's on our side -- Mo-mentum. Sorry for the lame Lee Corso quote.

1:02: The KTVB team is perplexed by the boos. I'd be booing too if my team kept running an running.

0:55: Harper throws! And it's nearly intercepted. Flag down. The KTVB team fails to acknowledge this. Offsides on Boise State. Dangit.

Harper runs for the first down. Big surprise

0:34: Kyle Wilson comes up with a huge interception! This should finish out the half.

Wow, what a half. It really was amazing how well Kellen Moore played. It's such a striking difference from Taylor Tharp at Washington last year or Jared Zabransky at Georgia in 2005. As a team, they were able to come into a large, supposedly loud stadium and weather the emotions and punch back. There was no sign of a deer in the headlights look from any of the players.

As much as Duck fans wanted to believe in their 3rd string QB's, there was still a reason why they were backups. They've gone 3 for 6 for only 27 yards between them. It finally looks like Boise State's defense is starting to key on this. They are still giving up some big plays on the option keeper, but they also have a number of plays for losses.

The Broncos have capitalized on the 2 turnovers and the botched punt by Oregon.

Finally, Oregon was down big last week. Do they have it in them again to come back? Surely, Chris Petersen is preaching this in the locker room.

14:35: Harper is still in. Apparently Masoli is out with a head injury. Roughing the passer penalty definitely worth it in my book.

12:37: And Kellen Moore throws his first pick of the year. Apparently it was partially deflected, I'll have to take Tom Scott's word on that since the feed is a little grainy. Good field position for the Ducks.

12:24: Jeremiah Johsnon takes it around the corner for the score. Looked like a hold on the edge but what do I know.


10:20: Oregon continues to pund it away on the ground. I have to give them credit for the persistence.

8:40: Another 3rd and long and the boos are raining down again.

Ellis Powers steps up to stuff another run on 3rd and long. This is getting ridiculous. At some point they've got to let Harper throw, right? It can only mean more picks for the Broncos.

6:34: David Augusto comes in to explain the sideline interference call. Thank you, David. Glad you could make the trip.

6:08 Jeremy Avery breaks loose on a screen pass for 37 yards. Oregon has taken away the running game for the most part but Kellen Moore has been able to pick apart the secondary.

4:39: A completion to Austin Pettis brings another first and goal for the Broncos.

2:47: Boise State will have to settle for a FG for the first time inside the red zone today. It's good.


1:59: Harper drops back and looks to pass but decides it would be better continue his current course of action and tuck it away and get sacked.

1:43: Kyle Wilson picks off Harper for the second time today. They've really got something going between the 2 of them seeing how Wilson is the only person he's completed a pass to today.

0:17 Brotzman adds another FG to his resume as Mark Johnson reminds us that he's Mr. Automatic.


Oregon almost breaks one for score on the return. Luckily he was pushed out of bounds and the Oregon offense will be forced to do the scoring.

0:04 Wow, apparently Oregon has just burned Darron Thomas's redshirt for this year. So much for that love that Harper was getting from Oregon fans before this game.

I'm holding up four fingers. I hope you are too, wherever you are.

14:49: Thomas throws a catchable ball that's dropped. About how the whole day has gone for Oregon today.

14:41: FG missed. The kicker then pushed down a Boise State player. Someone needs to remind him a kicker.

12:06: Vinny Peretta goes up to make a great catch for the first down and comes down, apparently, unconscious after the hit. Did he hold onto the ball? That's what this Boise State team missed last year. Anybody that can make a catch like that, get knocked out, and still hold onto the ball is indespensible.

I haven't heard anything about Nate Potter today. Usually that's a good thing. I'm going to take this time during this injury timeout to salute him.

Ok, Vinny's not a superhuman as I thought. Apparently he dropped the ball.

11:42: Darron Thomas just completed Oregon's first ball in the second half. Maybe they should have done this sooner.

11:06: Darron Thomas does his thing, which is completing passes -- Oregon fans are unaccostumed to this, and completes a pass for a touchdown.


I sure hope that Boise State doesn't get conservative and run the ball too much this drive. Oregon's been shutting the run down all day.

9:30: 3 and out for the Broncos after Moore is sacked. Hopefully the Bronco defense has regrouped and is ready to deal with a passing game.

8:15: Thomas has Oregon down to the 18 already. I'm not a huge fan of the bend don't break defense right now.

7:19: Thomas finds Dixon for another touchdown. Mr. Kicker decides to bang the PAT off the upright. Way to go bud.


I'm feeling sick and the only prescription is a long, time consuming drive.

7:11: Huge (I'm running out of adjectives) completion to Childs. Takes some of the air out of the stadium.

And a fumble. That sucks.

6:36: Another completion from Thomas. This is getting out of hand.

6:22: Finally, the defense gets to Thomas and sacks him.

6:01: Thomas takes another hit and Jeron Johnson almost picks it off. 3rd and 18.

5:57: Pressure again on Thomas and it forces a 4th down. Oregon's going for it.

Thomas tucks it down and is forced out of bounds well short of the first down. Huge stand by the defense.

5:00: Ian finds a way to get positive yards. I'm as surprised as anyone.

4:14: Incomplete pass on 3rd and 5. Boise State will have to punt again. Still not feeling real comfortable over here.

Hopefully D-line can keep up the pressure. That made a huge difference last series.

3:55: Brandon Thompson picks up the 3rd interception for the Broncos for the day. Unbelievable. Tempers flare. I'm feeling rather emotional over here myself.

Yes, Mark Johnson almost called Jon Gott Austin Pettis. Not sure how you can make that mistake.

3:37: Another 3rd and long for the Broncos. Jeremy Avery on the toss and that will not be enough.

I guess one good thing that came out of this drive would be Oregon burning all of their timeouts.

3:26: Brotzman finally misses a FG today. So much for that "Mr. Automatic" nickname.

I am loving the new clock rules right now.

2:33: Thomas is throwing most of his balls high. They are catchable, so I don't think Oregon fans would complain, but he's going to get one of his receivers hurt.

2:27: Wow, I'm a little surprise Jeron Johnson just got ejected for that play. I guess he was defenseless but it is football. I wonder if there are any ramifications for the ejection.

2:07: Thomas just found Dixon for his 3rd TD pass of the quarter(?). Thomas overthrows the receiver for the 2 point conversion. 5 point lead with an onside kick coming.

1:00: Another freaking 3rd and long. Tom Scott's doing math and thinks the Broncos could drain the clock here. I hope he's right.

That does it. I have much more of a sense of relief than excitement. Not complaining though.