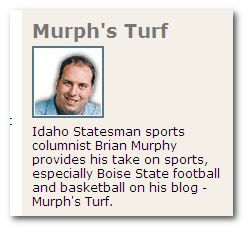 The fall of the Idaho football program has gained increased attention over the last few weeks, even though it is not so much a fall as it is a decades-long coma/catnap. The latest to throw fuel on the fire is the Statesman's own Brian Murphy, who used his newspaper column (not his blog, which is solely reserved for pizza guessing) to rail against the Vandal athletic department.

Just how bad does Murphy feel the situation is in Moscow? Bad enough to open his story with five successive fragments. Take a read:

A month into the college football season, the Idaho Vandals — and now their cheerleaders — continue to make headlines.

For giving up 70 points in the season opener to Arizona.

For placing their logo on the rear end of their football pants, prompting a quick removal and inspiring thousands of jokes.

For dropping consecutive winnable games — to Western Michigan and Utah State — by a combined 48 points.

For making the cheerleaders cover up their "skimpy" uniforms, igniting another round of humor at Idaho’s expense.
Granted, the Vandals are in bad shape, but five-fragment-bad? This thing is worse than we thought.

Most of the blame has been placed on athletic director and part-time Robb Akey mustache wingman Rob Spear for his inept handling of Vandal athletics. During Spear's tenure, Idaho has won about a quarter of its games and has consistently proven to be one of the worst schools around in the sports that matter most: football and men's basketball.

Spear's "vision," as mentioned non-concretely in Murphy's column, has yet to come to fruition, probably because it doesn't exist. New blog "Fire Rob Spear" sums up the situation thusly: "I hope you aren't here for another four years! Resign!!"

Murphy's overall tone to the article, apart from gross grammar misconduct, is that Vandal administration needs to get their act together before they embarrass the program even further. And the best way to get that point across, naturally, is a fragment.

It makes you wonder about the past four years.