WAC schools taking on the big boys this weekend

Share All sharing options for: WAC schools taking on the big boys this weekend 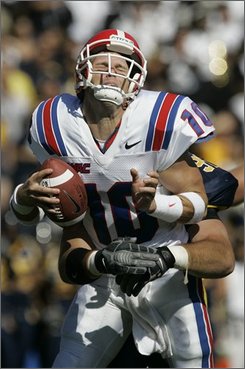 While the Broncos kick back and welcome a Division I-AA opponent on Saturday, several other conference teams will take a much different approach to their season opener. Specifically, certain defeat.

OBNUG reader and soon-to-be contributor Stephen Grettenberg breaks down the lopsided matchups with levity, grace, and insight. We would have probably used inappropriate puns.

LaTech vs. Mississippi State
Louisiana Tech picks up QB Taylor Bennett, who started for Georgia Tech last year. Despite being new to the program, he has been given the starting nod, after he fled when former Navy coach Johnson brought in his run-oriented attack. For some reason there is a lot of buzz about the Mississippi State game, in part stirred up by alum Terry Bradshaw, and Louisiana Tech is looking at the game as though it was the bowl game they failed to reach last year. Expect them to throw a lot. A few people are looking at this game as a possible upset, but I expect Mississippi State to pull out a win with tough running between the tackles, ball control, and careful play. How quickly can Bennett pick up the offense, or will they tailor the offense to him? This might be a pretty good game.

Hawaii vs. Florida
How important is strength of schedule? How different are leagues? Well, take the season opener of last year's 9-4 Florida team and last year's 12-1 Hawaii team. Florida is ranked #5 in the country, has Heisman winner Tim Tebow, and is a solid contender for their second national championship in three years. If you are Hawaii the best you can hope for is to not embarrass yourself and the WAC on the big stage. What a game to draw as a new head coach.

Where exactly is the team without Colt Brennan, the receivers, and June Jones? I actually expect they will field a pretty decent team, but the perception will be that there was a great drop-off. This year Hawaii makes up for the cream puff schedule with four bowl division games against the likes of Florida, Cincinnati, and Oregon State. I can’t recall another WAC team playing that kind of slate.

I am curious about this game, to see how Hawaii shows up for their new coach in Florida. Do they put together a decent passing game? Florida’s secondary is not all that great. Do they come out with spirit, and a desire to show they can compete this year? We'll see.

Idaho vs. Arizona
I expect to feel sorry for Idaho.

Fresno State vs. Rutgers
This high profile game can actually help the WAC gain a measure of respect lost by Hawaii in the Sugar Bowl. But can a diehard Boise State fan root for them? It is hard.

Fresno State returns a lot of last year's starters and is expected to be improved. A lot of credit is given by the media to the fact they have veteran QB Tom Brandstater and RB Ryan Matthews. And, the truth is, they seem like they will be pretty good. It is good to have a rival with a pulse; it makes winning more enjoyable. I expect Boise State will do that to end the regular season.

As for Rutgers? CFN surprised me by picking Fresno State to slug it out in the offensive trenches and wear down Rutgers with blue-collar muscle. Last time I looked, Rutgers was no slouch. Rutgers is a deep perennial bowl team, has the savvy to pick apart a pedestrian Fresno State defense, is well coached, and shoulders some muscle of their own. If Fresno State wants to make believers out of people it starts here.

Okay, I admit I will be rooting for Rutgers. It would help build towards a dramatic end of the season and great exposure for the WAC if Fresno State wins here and all season long until they hit the blue turf, so that will have to console me if Fresno State wins.