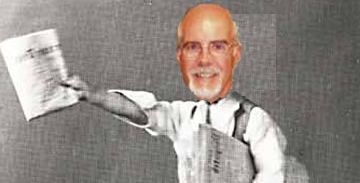 The Broncos will scrimmage tonight behind closed doors at Eagle High School. Not even our fake press passes will get us into that one. Here are today's links:

Tom Scott brings levity to Moore announcement [Scott Slant]
And he did so with only a handful of stories about players no one remembers.

Boise State will most likely win with running backs [Press-Tribune]
Having a starting quarterback is nice, but going five-deep in the backfield is nicer.

Teammates unaware of the Moore decision [Statesman]
They obviously did not step outdoors on Wednesday.

Stephen Reveles will be a factor this season [Press-Tribune]
Good luck finding very many Bronco fans who know who he is.

Dustin Lapray still getting over the loss of Bush Hamdan [BSU Blog]
"He is a genuine man." How uncomfortable.

Lists galore for Bronco football [Fight Fight BSU]
A Boise State 2009 season preview that Letterman would be proud of.

Hawaii's Graunke back on the team [Warriors Will Throw]
Credits tutoring help from Dora the Explorer.

The most convoluted football preview ever [Deadspin]
Orlando Sentinel finds a way to get us unexcited about the upcoming season.