Share All sharing options for: Friday: Links with Fall Camp 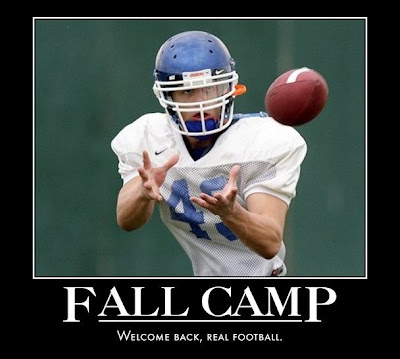 
The tenth verbal commitment for the Boise State Broncos came yesterday from Saguara (Arizona) defensive end Justin Jungblut. The senior-to-be is 6'6", 250 pounds, and he should feel right at home when he hits campus next fall.

Jungblut will join former Saguaro teammate Joe Kellogg on the Boise State roster. Kellogg is a freshman offensive lineman. Jungblut said he had 40 tackles, 15 for losses, and also had two sacks last season.

Jungblut also said that he had, like, 50 fumble recoveries.

Fight Fight BSU has the scouting report on Jungblut, who sounds like a keeper. Don't they all? He spurned offers from Idaho (good choice), Utah, UNLV, Air Force, and Wyoming. Coach Pete's penmanship sealed the deal.

"They did the best job of making me feel welcome, by far," Jungblut said. "Coach Petersen has written me two letters — hand-written, so I thought that was pretty great."

For some reason, Robb Akey's singing telegram just didn't do it for Jungblut.

Not surprisingly, no Utah State players make the list.

Mark Sanchez must know someone at the Rivals office.

Fantasy CFB takes it up a notch [Wall Street Journal]

Then again, so is Derek Dooley.

It looks so huge!