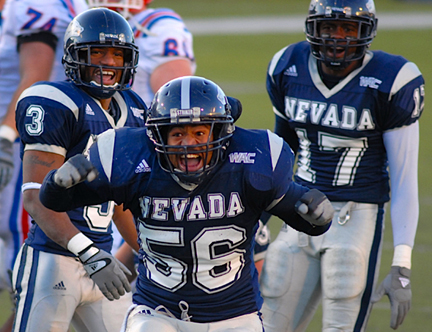 One of Boise State's chief WAC rivals this season will be the Nevada Wolf Pack, who should have one of the best offenses in the conferences. Supposedly.

Such was not the case in Nevada's first scrimmage of the fall yesterday.

The first scrimmage of the 2008 season went to the defense which scored twice and allowed only one score in a 90-minute and 90-plus play scrimmage Sunday at Mackay Stadium.

The "D" returned a fumble and an interception for touchdowns and forced five turnovers total. Colin Kaepernick and Luke Lippincott, the two stars of the Nevada offense, were held to 102 yards combined, and OBNUG's pick for preseason WAC offensive player of the year, QB Nick Graziano, went 3-for-12.

By the way, the Nevada defense is terrible.

What should Bronco fans make of this result? Probably little. Seeing Nevada struggle on offense will undoubtedly encourage us to make some inappropriate jokes at their expense, but when all is said and done, the Nevada offense will be fine, the Nevada defense will be bad, and the WAC championship will still come down to Fresno State and Boise State.

In the meantime, we'll be snickering at Kaepernick's efficiency rating.