Share All sharing options for: Wednesday: Links with girth 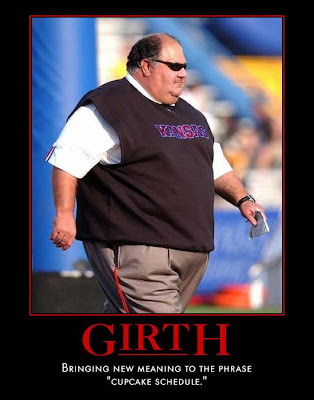 A veritable Who's Who at WAC media days [Press-Tribune]

The WAC Football Preview (motto: Salt Lake City sure is nice, isn't it?) is two weeks away, and while we bloggers patiently wait for our tickets to arrive, Dave Southorn of the Idaho Press-Tribune has the scoop on which players will be in attendance.


Good choices by the Broncos. Everyone will love to see Ian Johnson doing Ian Johnson things, and Mike T. Williams should get a chance to explain to people who he is. We're curious if Bush Hamdan got an invite but had to turn it down based on the inherent evil of a "media convention."

As for the rest of the WAC, Fresno State couldn't have chosen two more typical players; way to think outside of the box, hosers. And San Jose State is only bringing one player? We thought if any school was short on interesting players it would have been Idaho.

We're not even going to touch this one.

Players aren't the only ones reneging on commitments [SI.com]

Someone give Utah State a hug! [Bleacher Report]

And a 20-point handicap in non-conference games!

So long as they aren't playing intramurals.