Share All sharing options for: Wednesday: Links with dread

The WAC preseason picks are out. Click here for the results. (Spoiler alert: the good guys win.) 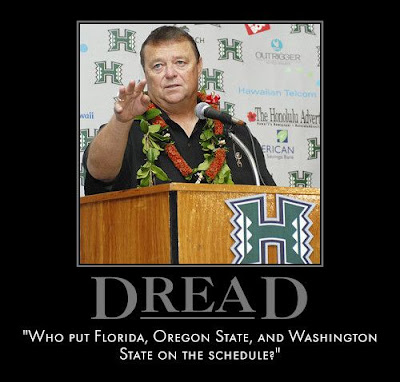 
For awhile now, it seems like the Broncos have been exploring options on how to get out of the WAC. Their latest accomplice may be...the Humanitarian Bowl?

The Mountain West could send a team to that game this season if the Atlantic Coast Conference fails to qualify an eighth bowl team, but a deal would be for a guaranteed spot in 2009 for the No. 5 MWC team. MWC commissioner Craig Thompson didn't deny Boise State might use the bowl as a means to gain admission into the Mountain West.

What strange bedfellows. Boise State and the H-Bowl have a tenuous history, mostly because BSU treats the home game as a fall-back option, not unlike our dating history in high school. "Well, if the Hawaii Bowl asks us out, then we're going, but I guess we could always play mini golf with the H-Bowl if all else fails." We love mini golf.

Not sure how everyone is making the presumption that a MWC team in the H-Bowl means Boise State is making a play to join the conference. From what we can tell, the Broncos might have more incentive to stay home and face a MWC team (ugh, Wyoming again?) to prove that they belong with Mountain West teams.

It's worth following to say the least, but we'd rather the Broncos be looking for subversive ways to join the Pac-10.

Thanks, Warriors Will Throw. We appreciate the extra ammunition.

Voting FSU ahead of BSU in preseason polls, however, is not big time.

An original WAC preview. How refreshing.

Brent Guy rationalizing his career record should be fun.

We just threw up in our mouth a little.

Idaho State may not even be competitive in Big Sky [ISZ]