Share All sharing options for: Wednesday: Links with anticipation 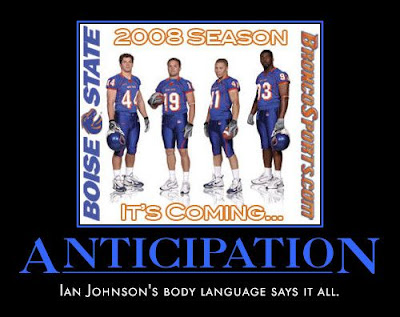 Got any holiday plans, Weber State? If not, then there might be a desperate lower-tiered bowl that wants to speak to you.

We found a lot of gems in the Missoulian's series on the University of Montana's chances for a move to Division I-A, but none of the tidbits were as strange and embarrassing as this one.

Last fall a lower-tier bowl called the Big Sky Conference to inquire about inviting one of its teams. We are not making this up.

"It kind of caught us by surprise," said Montana athletic director Jim O'Day. "But I think it's something that might have to happen."


The obvious question is which bowl was doing the inquiring. There are only a few small-time West Coast bowls that would have been interested in a Big Sky team, and yes, the Humanitarian Bowl would probably be on that list. Any guesses would be pure speculation. That said, we are looking at you, Emerald Nuts San Francisco Bowl.

The story was somewhat of an admonishment of Division 1-A's lax standards on bowl eligibility. How great would it be to see a 6-6 Minnesota lose out to an Alcorn State? Is this why NCAA administrators are so hesitant to go to a playoff system?

A great recommendation from a Behler peer [Gazettenet]

Wonder if this guy was on Behler's resume reference list.

Ian Johnson gets a 93 from EA Sports [Vetzballin]

Dan Hawkins and the Buffs a team on the rise [SI.com]

Stewart Mandel has his eye on them.