Share All sharing options for: Tuesday: Links with predictions 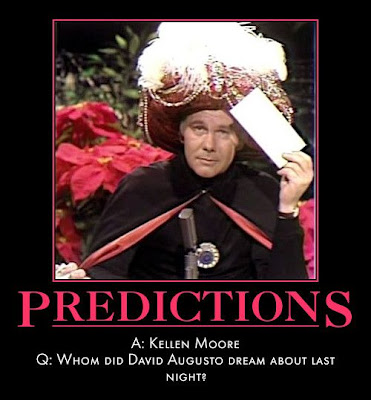 Story of the day:
RB Ian Johnson tops in the WAC? [ESPN.com]


ESPN's Graham Watson posed an interesting question on her blog yesterday: Is Ian Johnson the WAC's best running back? If Watson knows, then she's not telling as her story politely skirted the issue with open-ended statements, facts, and Johnson quotes.

But is he the best running back in a stacked WAC?

"I've seen a lot of these guys and you look at (Nevada's Luke) Lippincott and all the guys from La Tech and even the guys from Fresno, these guys are very different running backs from myself," Johnson said during WAC Media Days last week.

Johnson was the best running back in the WAC during his glory year in 2006 and was even considered a darkhorse for the Heisman Trophy. But those numbers trailed off last season as Johnson was plagued with injuries.

We live in a black-and-white world, so this article, with all its grayness and ambiguity, was hard to deal with. The answer, in our opinion, is clear: Ian Johnson is not the WAC's best running back. He lost that title last year when he struggled with injuries and effectiveness. Let the angry emails fly.

Remember, Johnson was not very good at times last year, and Bronco Nation openly questioned what was wrong with him. Sure, he is saying all the right things and doing all the right things this offseason, and to be honest, we are confident that he will regain the mantle of WAC's top running back this season. But in the meantime, we feel he is no longer the top dog.

There, Graham Watson. We said it.

The Aggies get replaced by Notre Dame. Boise State would do the same if it could.

USC and Georgia still to come--most likely in that order.