Share All sharing options for: Thursday: Links with technology 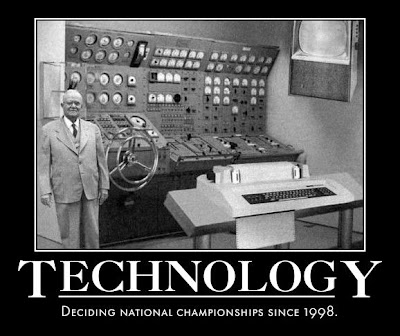 Story of the day:
Karl Benson's state of the WAC [ESPN.com]


In his press conference at the WAC media days yesterday, commissioner Karl Benson had plenty of good things to say about the recent success of the WAC and the high national profile that the conference has earned over the past few years. The only thing that could bring down his good times? Idaho, Utah State, and NMSU.

Besides those three black sheep, Benson was pleased with the conference's progress. And he always loves a good MWC ribbing.

"The WAC has re-established itself as the second-most recognized conference in the West behind the Pac-10," Benson said. "It wasn't intended to compare the WAC to the Mountain West. The WAC is well-grounded, well-established and continues to perform at a high level."

Benson did not confirm an ESPN TV deal, but he did promise better officiating and a concerted effort to keep anyone from using the term "non-BCS conference" ever again. Good luck with that.

Ian Johnson, Mike Williams, and Coach Pete on the mic.

Shirtless Idaho players? We're kind of glad we're not there.

Dan Hawkins wonders if BSU will take him back.

Not blowing chunks in an 800 mph airplane is quite the achievement.