Share All sharing options for: Thursday: Links with greatness 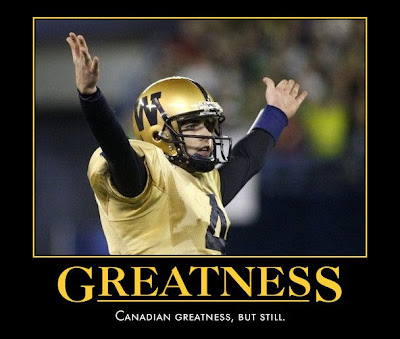 Story of the day:
Dominique Vinson and other Bronco casualties [Statesman]


As excited as we have been this summer about early commitments, Bronco fans could be just as concerned about the number of players leaving the team. The latest casualty is WR Dominique Vinson, a grayshirt last season who had some exciting expectations this fall. Let's go to the Statesman for the details.

No details of Vinson's departure were available.

Vinson's departure adds to the rather long list of Bronco players who will not be back this year (mentioned by us and FFBSU), including some for medical reasons and a few for personal reasons. Depressed yet? If not, then this might do it for you (from the Scott Slant):

Ebenezer Makinde, recruited out of Phoenix as an "athlete" (meaning he'd be plugged in where he fits the best), might be waffling. Tim Schultz (Rivals.com) writes, "Makinde gave a verbal commitment to Boise State at the end of May and while he says he's still committed, he would like to see what options other schools might have to offer to get a feel for whether or not he made the right decision.

With all this discouraging news, it would be nice to have something optimistic to talk about. How 'bout a Jeremy Childs update? He is listed on the Boise State roster, which means he is either on the team or that the someone in the BSU administration office does not proofread. At this point, we'll take whatever we can get.

Sadly, it will be the closest we come to getting there any time soon.

But their PowerAdes sure are cheap!

Is there anything our teams can't do?

Not all Idaho players are worthless [Nevada Appeal]

LaTech could be a sleeper [Times-News]

If sleeper means boring, then yes.

Not losing as badly as last year would be sorta like a win.