Share All sharing options for: Monday: Links with officiating

We'll have some exciting Ryan Dinwiddie news later today. What other kind is there, right? 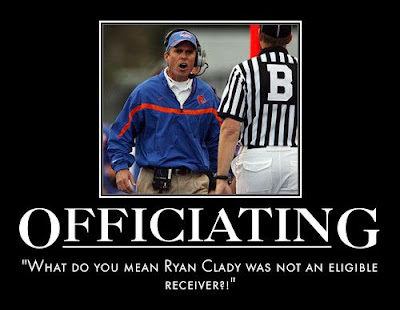 Watson made his prediction fully expecting the wrath of Vandal fans to rain down upon him. Instead, he got propositioned from a guy in Seattle.

Dan in Seattle writes: Hey Graham Watson, You challenged us Vandals fans to "let the emails fly." In light of your unfounded prediction that the 2008 Vandals will NOT WIN A GAME (and keeping with the relatively non-inciting tone in which it was registered), I propose a little more. How about a straightforward, even odds bet to back up that fearless prediction? Up to $500.

Watson didn't bite, but we imagine that Robb Akey would. Five hundred bucks could buy a lot of Just for Men mustache coloring.

The only way we see Idaho not going winless is beating Idaho State in Moscow. However, Seattle Dan seems to think there are other wins on the schedule, too.

We'll stop you there. Apart from maybe Utah State (who, if you'll remember right, beat the Vandals last year), there are pretty much no games that Idaho is expected to win in the WAC. Maybe things will be different come midseason, or maybe pigs will fly through frozen hell. We're not holding our breath for either.

The south end zone will be closed someday [Statesman]

$2500 per person for seats in the Mothership [Statesman]

Now if we could just get the other 150 pages scanned, we'd be in business.

Week One lines from around college football

Baseball not in BSU's future [Press-Tribune]