Share All sharing options for: Monday: Links with body paint 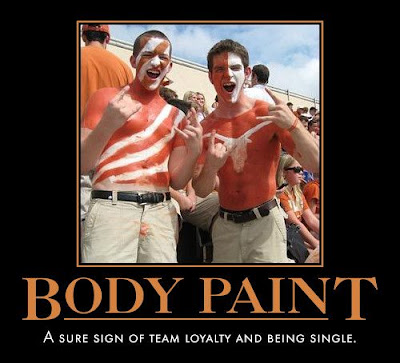 After a couple fruitless summers of negotiations, it appears Karl Benson and the WAC finally have the deal they want from ESPN. The Honolulu Advertiser is reporting that the WAC will sign a new deal with ESPN that will increase the exposure of the league's teams and pay the conference royally for the right to do so.

The WAC had been receiving $900,000 per year on a six-year deal set to run through the 2009-10 academic year. That figure was down from $1 million after Texas-El Paso and three other schools left for Conference USA in 2005. The new agreement is expected to be worth, on average, approximately $4 million per year to the conference.


That's a 400 percent raise! Was Dwight Schrute involved in the negotiation talks for the WAC? The extra money is encouraging, and the extra exposure, especially for men's basketball, is exactly what the conference needs.


Under the current contract, the WAC (men's basketball) has been guaranteed only three games per season (two regular season games and the conference championship). The new deal is expected to more than triple the opportunities. In football, the WAC has been guaranteed a minimum of eight games, though it has averaged about 10 the last couple years. The new deal could double those opportunities.


Unfortunately, we are one step closer to Pam Ward covering Idaho-Utah State football.

Good for the WAC and good for Karl Benson. This TV contract is unlike any other that a small conference has. Rather than create their own station (Mountain West Conference) or toil in anonymity (Sun Belt, MAC), the WAC has found the kind of exposure and national spotlight that most conferences covet. Now if only Benson could fix the WAC competition, he'd be onto something.

We're curious what Raphiel Lambert ordered at the concession stand.

Points awarded for not talking to the media.

Southwick and Peterson are keepers; Burks may or may not still exist.

What would make them think the Oregon game is unwinnable? Past precedent?

Checking in with some incoming BSU football recruits [Statesman]

Phil Dailey gives a vote of confidence to Behler [Press-Tribune]

The same vote cast for Hamdan or a different one?