Share All sharing options for: Friday: Links with regret 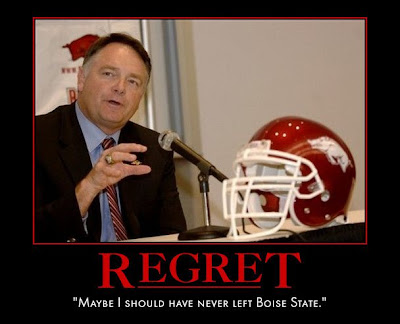 
At the WAC media convention yesterday, Coach Pete had a veritable laundry list of roster turnover to discuss, including some disappointing news about two potentially exciting recruits.

Linebacker Jack Sula of Carson, Calif., told the Broncos staff that he will not join the team because of family issues, Petersen said.

Van Drumgoole of Vallivue High, a speedy wide receiver, plans to attend a junior college instead of Boise State to improve his academic record, Petersen said. The Broncos had planned to grayshirt him.

Petersen also said that OL Paul Lucariello's BSU career is over due to medical reasons, and DL Phillip Edwards and DL Kapono Rawlins-Crivello will not be returning to the team. Spencer Gerke, an incoming will recruit, will be the only one to grayshirt out of the incoming class.

There was no word on WR Jeremy Childs, and there was even less of a word on the starting quarterback.

And if USA Today says it, it must be true.

The afl2 playoff chase is so on!

Probably because no one else wanted it.

450 yards passing? Game-winning touchdown? Sounds like Dinwiddie to us.

The name says it all [Holbrook4Heisman]

Thanks for the tip, Graham Watson. Or rather, no thanks.

One more reason to be scared.