Share All sharing options for: Friday: Links with kitties 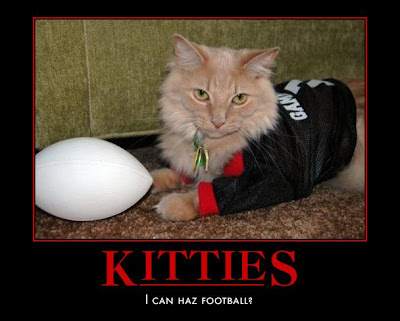 More recruits! How 'bout that! [Press-Tribune]

The Broncos have reeled in recruit number nine. QB/LB Gabe Linehan from Banks High School (Oregon) has given his verbal commitment to the Broncos. Does his name sound familiar? It should. His uncle is Rams head coach and former Idaho quarterback Scott Linehan, and his father was an All-Big Sky linebacker at Idaho.

Despite the fact that the Broncos' roster is already replete with quarterbacks and linebackers, Linehan was still happy to commit early. Of course, he won't be a QB/LB for long.

He said Bronco coaches want him to play tight end once he arrives in Boise, though he is the quarterback at Banks.

Currently, Linehan is 6'4" and 205 pounds, so he will need to put on some weight to be effective at the tight end position. Fortunately, Linehan has two 300-pound brothers who have played line for Pac-10 schools, so his mom should know how to feed him.

Here is some extra reading on Linehan:

Our immediate reaction: Tharp was still on the Panthers?

Next up? New Boise State inflatable helmet for team intro!

An early signing period would be nice right about now

The Idaho Steeleheads will forever be bridesmaids.

We stopped reading after it said Boise State was rebuilding.

Thirty pounds lighter than last year, but the heavier expectations should balance that out.

And we're still scared of going to Eugene.