Share All sharing options for: Friday: Links with independence 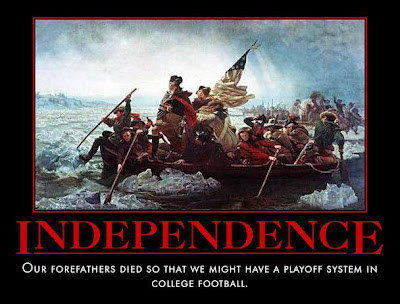 The Denver Post is celebrating the 10-year anniversary of the Mountain West's split from the WAC the only way they know how: making Karl Benson relive it all over again.

DP: That had to be the lowest point of your professional life 10 years ago when the Mountain West teams left...

KB: May and June 1998 was certainly difficult. It was challenging, tumultuous and gut wrenching both professional and personally.

Aside from the start of the interview (great ice breaker, Denver Post), the story ended up being a positive look at how the WAC has survived throughout the past 10 years. Benson gave a lot of praise to Fresno State for soldiering on in the early years, and he of course had good things to say about Boise State football, too. But God bless him if he didn't try his best to put a positive spin on Utah State, Idaho, and NMSU.

DP: You're like the Statue of Liberty of college athletics: Give me you poor, your tired, your huddled masses.

KB: We were forced to fill some holes, fill the gaps... We claim when teams join the WAC they get better, some get better quicker than others. I'm still confident our last three additions are going to get better.

The behind-the-scenes information from Benson was pretty neat to hear, and the Denver Post followed the story up with a feature on the present state of the WAC and the MWC. For all the bad things that are said about the WAC, it was nice to find a story that showcases the conference to a certain degree. That said, we'll flip to the Pac-10 in an instant if they come calling. Sorry, Karl.

The triple jump finals or Mars Attack? We could go either way.

Watch your back, Chadd Cripe.

Alright! We got a man on the inside.

He will not be signing souvenir Sugar Bowl T-shirts.

Thank goodness we don't have to see these uniforms in person any time soon.