The Idaho Press-Tribune's Phil Dailey and Dave Southorn have embarked upon the daunting task of ranking all 120 Division 1-A teams before the season starts and, in so doing, have discovered the most awesome form of busy-work ever. How serious are they about the task? Serious enough to give the countdown its own personal website. 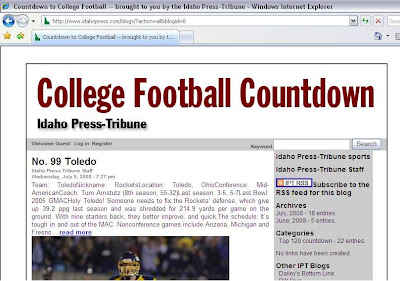 The countdown, which began with Western Kentucky and will hopefully end with Boise State, is already into the 90's, which typically means that half of the WAC would be mentioned by now. And sure enough, Utah State, Idaho, San Jose State, and NMSU have already been highlighted...or low-lighted, as it were. Here are some kind words the IPT guys had to say about the University of Idaho:

The season is a success if ... The team wins more than three games.


We thought #112 was a little high for the Vandals.

With nearly 100 more teams to go, there is still a lot of intrigue left in the countdown. For instance, will Phil Dailey's love for Louisiana Tech propel the Bulldogs ahead of Nevada where they probably do not belong? Is there any way that Dave Southorn does not vote Colorado #1? How does William Love fit into all of this? Are the IPT rankings part of the BCS formula? Will a conflict of interest prevent them from voting for Boise State? Is this whole thing an excuse to write off Southorn's preview magazine purchases at Barnes & Noble?

And most importantly, what will happen to the College Football Countdown once there is no college football left to count down? We're just praying that the Women's College Basketball Countdown is not in the works.