Youngest Hawkins to walk-on at BSU

Share All sharing options for: Youngest Hawkins to walk-on at BSU 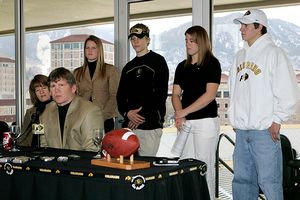 Drew Hawkins, the youngest son of former BSU coach and current goat Dan Hawkins, will be playing quarterback at Boise State this fall. Join the club.

Dan and Misti Hawkins' youngest child, Drew, signed a letter of intent to play
for Boise State in February and already has enrolled.

We're pretty sure he didn't sign a letter of intent, and Dave Southorn can back us up on that.

Drew Hawkins, the youngest son of the former Bronco coach and brother of
Colorado starter Cody, will walk-on at Boise State. However, in an ESPN article,
Ivan Maisel said Drew signed a letter of intent. As far as I know, Drew will be
a walk-on.


Either way, the golden touch of the Hawkins family will be gracing clipboards on the BSU sideline in the near future.