Wednesday: Links with thumbs up

Share All sharing options for: Wednesday: Links with thumbs up 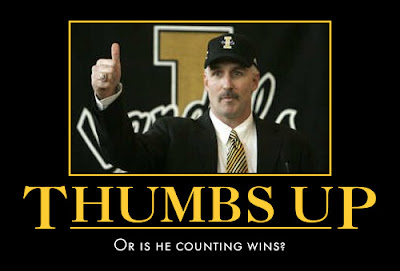 
Success takes time off for nobody, which is too bad for the summer vacation plans of Boise State players.

The Broncos kicked off their eight-week summer training schedule that is equal parts preparation and muscle torture. Strength coach Tim Socha is in charge of the conditioning, and the Statesman reports that there is 100 percent participation from the team.

"This is a big deal for (the players)," Boise State strength and conditioning coach Tim Socha said. "This is to us - to me and to them - the start of their season. We come in in the summer and they know they've got eight weeks of hard work to get ready."

He wasn't kidding about hard work. Take a look at one of the more demanding exercises:

Former strength coach Jeff Pitman made the "decks" famous - a workout during which the players ran/walked/crawled to the top of Bronco Stadium. In 2005, the players did 20 decks in one workout by the end of the summer.

Socha, who replaced Pitman in May 2006, put his own twist on the decks. He staggers the players' starting spots based on body type, so linemen don't have to climb as far as running backs, and he times them - the goal is 10 seconds per climb.

Ten seconds per climb! We get tired just thinking about that.

The workouts will be four days a week for about two hours each session, and they'll involve equal parts weightlifting and running. Players also plan on holding their own player-led practices about three times a week, and those will involve lying around and trying to catch their breaths.

Vlade Divac: humanitarian [Idaho Statesman]
A flop for every child.

Hawkins' tour across Colorado [Post Independent]
Why? Because it's Division I football! It's the Big XII!