Share All sharing options for: Wednesday: Links with contentment 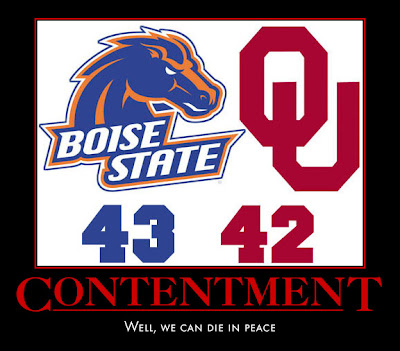 
The excitement over one of Boise State's most anticipated games of the season is apparently quite relative. When the Broncos visit the Ducks this September, only the local crowds will be watching.


The Pac-10's TV partners - ABC/ESPN, Fox Sports Net and Versus - passed on the Sept. 20 game when they finalized their selections Monday.

We assume the choice was made considering the possibly damaging combination of green, yellow, orange, and blue on TV sets nationwide. We also assume it has nothing to do with the Broncos laying a traditional egg against BCS competition on the road.

The game will air locally on KTVB and will be covered by the new Mark Johnson-led broadcast team.

Said KTVB sports director David Augusto: "It looks like it's ours to do."

The Oregon game would give KTVB the rights to seven games this season - the first three games of the season and four straight games in November.

The more Mark Johnson, the better. We think.

Boise State must be in Rivals Top 50 [Rivals.com]
Waiting for them to be ranked is kind of like Christmas for us.

Campaigning to be the next USU coach [KVNU]
We could think of at least 500 better things to do.