Share All sharing options for: Thursday: Links with practice 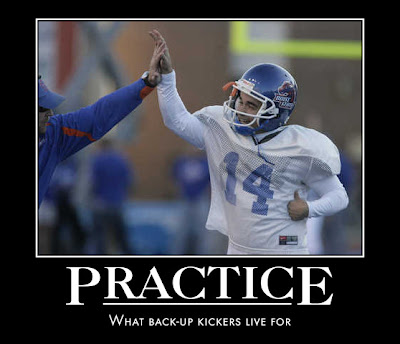 
Over the past several years, the word "underrated" has rarely been used when referring to the Broncos. "Dominant," yes. "Underrated," no. But maybe being underrated isn't all that bad.

The Broncos have owned the Western Athletic Conference since joining the league, posting a 46-2 ledger against their W.A.C. coevals. Boise State is nigh-invincible on the blue turf, where they host Hawaii (in the Warriors’ post-deal-with-the-devil season) and the Golden State Bulldogs in Friday night showdowns.

Plus, this guy even has an optimistic view of the Oregon game.

This is a good year for the Broncos to get Oregon early. The Ducks open with a conference rival whose embattled coach has guaranteed a victory and travel to Purdue the week before hosting Boise State. That’s a pretty rough opening run for a team that lost Dennis Dixon and Jonathan Stewart.

In an offseason where the consensus seems to be shifting away from Boise State's winning tradition, it is refreshing to see that someone still believes. Although, we do prefer the word "dominant."

Of course, then the author had to go and ruin things by bringing up the Georgia game again.