Share All sharing options for: Thursday: Links with politics 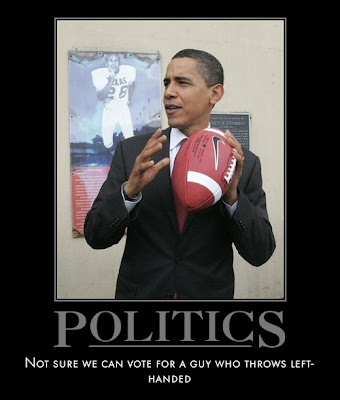 
Starting with the bottom of college football and working their way up, Rivals.com will be unveiling a countdown of all 120 teams over the next few weeks. And there's no surprise whom they chose for the bottom.

Numbers 118 and 119 out of a possible 120 are the WAC's Utah State and Idaho. Only Florida Atlantic was deemed worse.

THE BUZZ: It's tough to succeed in the WAC when you can't throw the ball effectively. Playing in a league that featured five of the nation's top 40 passing offenses last year, Idaho is going to continue to lag behind until it shores up its passing attack.

Well, we don't know if we would call it "buzz." More like sad, depressing truth.

Their take on the Aggies started awfully optimistic, but quickly turned south.

Utah State enters the season on a two-game winning streak. They haven't won three in a row since 1996-97. But a 1-4 start looks likely, and unless the Aggies win at home against Idaho on Sept. 20, a winless season is a possibility.

Too bad Florida Atlantic isn't on the schedule.

WAC expansion with...Utah Valley State? [Parsing the WAC]
They don't have a football team, which is a far more honest assessment than that of the University of Idaho.