Share All sharing options for: Thursday: Links with losing 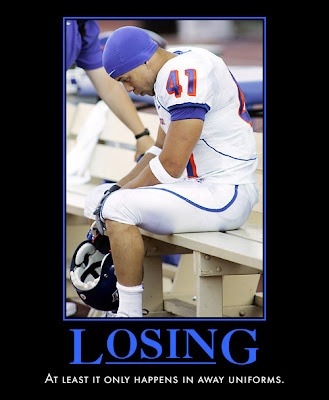 
The Fresno State baseball team completed a surprising run to the finals of the College World Series by defeating Georgia and winning the whole thing. How refreshing that a collegiate sport have a tournament to decide the national championship regardless of school size or conference affiliation.

The school became the lowest seeded team to win an NCAA championship in any sport. It was a fourth seed at the Long Beach Regional, and began its unlikely run there, knocking off 11th-seeded Long Beach State and sixth-ranked San Diego. In the Super Regional, Fresno State won two of three against third- ranked Arizona State to reach the College World Series.

Fresno State went on to beat fifth-ranked Rice, eliminate second-ranked North Carolina and staved off elimination three times in the same tournament, ending with a 47-31 record.

We've joked that Boise State could replicate Fresno's success if they had a baseball team of their own, but after reading the unlikely and amazing road they took to the championship, we're not so sure that the Broncos could do that. (Just kidding; the Broncos could do anything!)

With the 49th pick in the NBA Draft, the Warriors take... [Press-Tribune]
Reggie Larry? One can certainly hope so.