Share All sharing options for: Monday: Links with temper 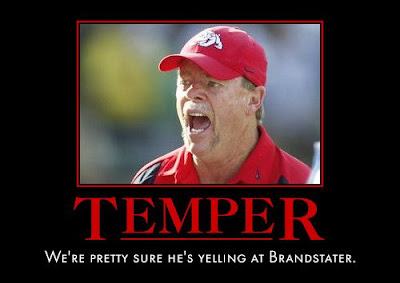 Story of the day:
Aaron Burks, man of mystery [Statesman]


Congratulations on the Idaho Statesman for breaking some Boise State football news yesterday with the announcement of Texas high school WR Aaron Burks giving a verbal commitment to the Broncos. We have just one question: who?!

Burks is a mystery to a lot of Boise State fans. Fight Fight BSU couldn't find much about him. The guys at Bronco Country unearthed his stat line from last year (seven catches) and not much else. We're happy that the Boise State coaches are able to discover such gems, but Bronco Nation needs some more information.

Perhaps this is the problem: the Statesman might have spelled his name wrong. We found an Arron Burks on the Baylor Scout page, and Boise State's Scout profile has it spelled the same way. Perhaps this way we can find out more information about the kid. At any rate, the plot remains thickened.

How to bet on the Nevada Wolfpack [Bet Us]
Subtitle: More than one way to lose money in Reno

Coach Pete the racehorse [Statesman]
It appears someone likes Boise State more than we do.

An Oregon comic book: The Amazing O-men [SI.com]
It is only a matter of time before we have Idaho: The Disappointing V-men.

The Mothership in photos [Statue Left]
Still awesome and large.

Countdown to media day begins [PWtW]
We were wondering when Chris Ault would be speaking.