Share All sharing options for: Monday: Links with success 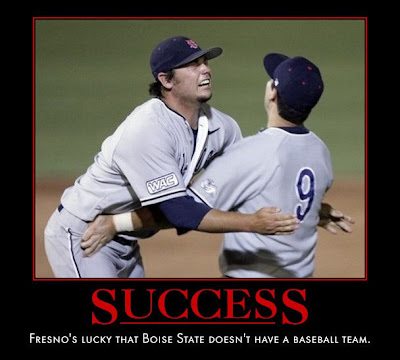 
The price tag of Boise State's stadium expansion is quite staggering. The Mothership, in all its skybox and loge glory, could end up costing the university $35 million. We would have built it for $34 mil.

Boise State plans to pay the debt with lease revenues on the new premium seating. The facility is expected to be sold out for the Aug. 30 football season opener against Idaho State. In fact, Boise State has lease agreements ranging from three to 15 years for every seat so far in the new facility, according to the athletic department.

The Statesman calls the add-on the most expensive building project in BSU athletics history. Part of the bill will be footed by the payout from the Fiesta Bowl (about two million dollars) and donations of nearly seven million dollars from generous boosters (you're welcome).

The stadium addition should be paid off by 2038. Maybe then the university can think about closing in an end zone.

The face of Idaho State [Kellis Robinett]
Glad to see Merril Hoge is in the running. Merril is glad, too.

Our favorite was Brent Guy and Jesse Ventura.

The impact of Boise State's true freshmen [Fight Fight BSU]
George Iloka seems too old and wise to be a true freshman, doesn't he?

Golden State taking a long look at Reggie Larry [Statesman]
Graham ball to Nellie ball will be an interesting transition.