Share All sharing options for: Monday: Links with relativity 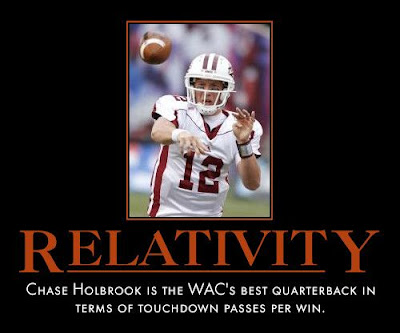 JT Ray at Bronco Nation NOW was kind enough to spill the details of his season ticket mailer that described the process for getting tickets to away games. For those interested in BSU-Oregon, be prepared to get your lotto on.

The Oregon game is being handled a bit different. In a separate form, any season ticket holder can submit an application for a Lottery to be held sometime after June 27, 2008. Those entering just pay for 2 tickets if selected and no more. Also those that are selected can pick up their tickets in Eugene, OR the day of the game with a photo ID. The total price is $112.00 and some mailing &
processing of $5.00.


Let's just hope that Boise State does the lottery thing justice and we get a live telecast of ping-pong balls in a hopper or Paul J picking names from a giant hat.

The rest of the away games are significantly less of a chore. BSU assigned ticket values, ranging in price from Southern Miss and SJSU at $37.00 to New Mexico State at $14.00. Plan your entire autumn appropriately.

Update on Jeremy Childs...kind of [Scott Slant]
He may or may not be in town.

WR transfers from Arkansas to LaTech [SI.com]
You read that right.


Chase Holbrook on QB watch list [NMSU.com]
Watch out for what? Failed expectations?