Share All sharing options for: Monday: Links with distractions 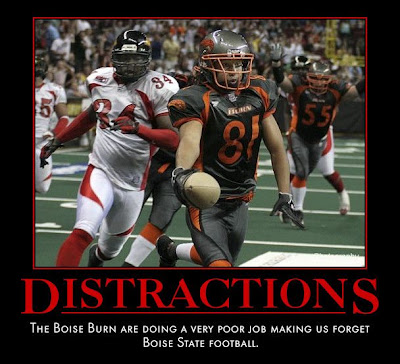 Can the Missoulian be Boise's newspaper? Please? The paper from Missoula, Montana, just finished up a series of fine journalism on the chances of U of M moving into Division 1-A. Saturday, they wrote a fascinating piece on how Boise State has fared since the Broncos' move to big-time college football.

The Boise State Broncos represent a best-case scenario for all Football Championship Subdivision (FCS) teams pondering a move up. An example of what is possible for those that risk stability for a spot in the Football Bowl Subdivision (FBS).


Not only was the article a wonderful read, but there was some good BSU knowledge in there, too. Reporter Bill Speltz did his homework and then some. Witness this encouraging quote:


"We purchased East Junior High School, just a quarter of a mile from here, that will give us 15fi acres we can access next summer," BSU AD Gene Bleymaier said. "We'll move the (running) track out of Bronco Stadium and our next expansion will be to horseshoe the south end of the stadium and add another 6,000 seats."


Thanks for the Bronco Stadium update, Missoula paper. Best of all, one of the endearing themes of the story was its focus on the importance of a great fan base. The Missoulian gave Bronco Nation a great big slap on the back.

The people of Boise are also a big part of the Broncos' success. When Boise State made its leap of faith into FBS football in 1996, Bleymaier knew he could depend on the community for support. That confidence made the transition about as smooth as can be expected.


And to think, we were joking when we took credit for BSU's success.

We highly recommend you reading this story for yourself.

Turned ankles will never be the same.

Bronco fans immediately pencil him in as starting wide receiver.

Our Ian Johnson/Marty Tadman two-sided jersey sure hopes not.

Calling Fresno the "California Bulldogs" loses credibility for this story.

We don't even want to touch this one.