This week's OBNUG Hall of Fame nominee is brought to you courtesty of Bronco fan Jason Haberman. Visit his blog at www.jasonhaberman.com. Praise his diction and vocabulary. And join him in recognizing one of the best performances in Boise State history. 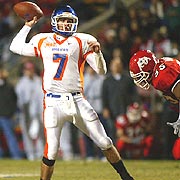 When I was asked to contribute a nomination to the prestigious OBNUG Hall of Fame I was torn. Having been a Bronco fan since birth, I wondered, who should I choose. What performance did I think was worthy of being nominated?

Maybe I should recognize all the destruction that LB/DE Eric Helgeson leveled on the Big Sky in the late 80s. Do I go back to that magical '94 run where QB Tony Hilde and RB KC Adams and company ended "The Streak" and made it all the way to the national championship game? What about QB Bart Hendricks and his 77-yard scamper in that Humanitarian Bowl versus UTEP? I was very close to choosing LB Korey Hall versus Oregon State in 2004 with the volleyball interception (one of his three that game) and subsequent bull charge down the sideline for the score.

However, there is but one performance that I witnessed that was so amazing that there was no way I could ignore it: Ryan Dinwiddie versus Fresno State, October 18, 2002.

Let me set the scene. Dinwiddie was our prolific passing leader coming back for his junior season after lighting up scoreboards and record books the previous year. Hopes were high. We opened the season with the usual drubbing of Idaho, which set the stage for Boise State's big trip to SEC country to face the Arkansas Razorbacks.

Well, that game didn't quite turn out as well as we would have liked. In fact, it was a disaster. Dinwiddie was sacked early in the game and broke his ankle in the process. The day just got worse from there, and we lost 41-14.

But worse than losing the game was losing our all-everything gunslinger. In came untested senior B.J. Rhode. Talk was, if we could get a split of the four games that Dinwiddie was going to miss, then we could still be in contention for the WAC title.

Rhode did more than split. He excelled. He took the reigns, and in those four games the BSU offense put up point totals of 35, 63, 58 and 52 in four consecutive blowouts. This got the locals talking: "Should Dinwiddie be the starter when he comes back?" "B.J. has earned the right to keep playing." So on and so forth.

We had Fresno in our building for a Friday night ESPN showdown for what could decide the WAC championship. The fans were pumped. This warm evening was the first game that the entire record crowd was completely decked out in orange, all 30,924 of us. Something special was about to happen. You could feel it.

Rhode started the game, but we all knew Dinwiddie would play. The real question was, how much, and would he be rusty?

Rhode engineered a 13-point cushion playing the entire first quarter. But Dinwiddie jogged out in the second quarter and answered every doubter. He simply put on a clinic. He was absolutely on fire. His final stat line says it all: 19 for 22, 406 yards and 5 touchdowns. In less than three quarters! Boise State set a school record for yardage with 688 yards that day; Brock Forsey pitched in 132 yards of his own. Dinwiddie averaged over 21 yards per completion. One in every 3.8 pass attempts ended with a touchdown. That is domination.

I haven't even gotten into his innumerable Boise State records or his setting the NCAA career passer efficiency rating record.

Dinwiddie owned Fresno that day. And in my mind, his performance is worthy to be a sure-fire OBNUG Hall of Fame inductee.