Share All sharing options for: Friday: Links with possiblities 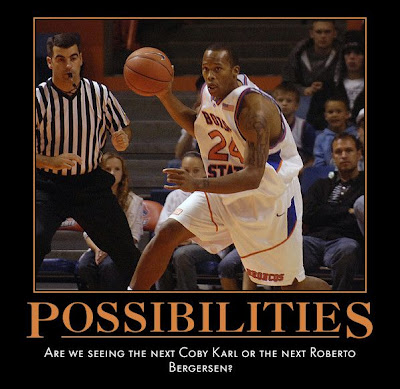 The local media is starting to turn in their preseason WAC ballots, and the transparency of the Idaho Press-Tribune affords us the luxury of peering into Phil Dailey's thought process. Playing a prominent role in Dailey's thoughts: the Hawaii Bowl.

I think you have to give Fresno State the nod, after all, the Bulldogs won their bowl game over Georgia Tech, while Boise State blew it against a not-very-good East Carolina team in the Hawaii Bowl.

Dailey has Fresno State at the top of the WAC, with Boise State at number two. Right behind them? Louisiana Tech. A gutsy call, but we like our local media members to think outside the box.

I’m a big Derek Dooley fan and I think he’ll have his team ready for the WAC after non-conference tilts against Mississippi State, Kansas and SE Louisiana.

We'll give you two guess who the teams at the bottom are.

Reggie Larry does not hear his name called [Yahoo!]
He may still have a chance to catch on with a team this summer

BYU snags two recruits that had BSU's interest [Daily Herald]
When you factor in Mormon missions, the Cougars can have 'em.

IPT recaps preview mags [Press-Tribune]
And in the process, saves us $14.95.

Tom Scott weighs in on stadium expansion [Scott Slant]
Scott: The south end zone will be a horseshoe by 2013.
J Bates snidely rips Brian Murphy's blog [J's Blog]Nice to know we're not the only ones who notice these things.

Weekend series on Montana's D-1 hopes [Missoulian]
Idaho gets the spotlight today. Enjoy it while it lasts, Vandals.