Share All sharing options for: Friday: Links with child endangerment 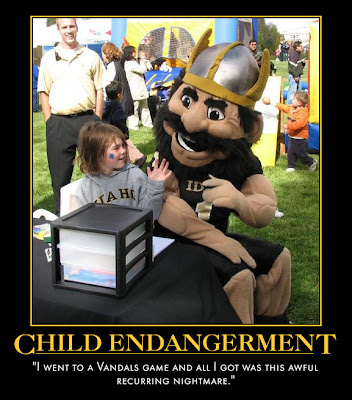 
The answer to the above question is, obviously, "We sure hope so!"

Kirby Moore, a wide receiver at Prosser High, sounds like the second coming of a Tim Gilligan-Jerry Rice hybrid. All he does is catch touchdowns.

As a junior in 2007, named first-team Class 2A All-State at receiver, as well as all-league at receiver and DB. Caught 75 passes for 1,313 yards. His 29 TDs set a Washington season record for all classifications.

He'll be camping at Boise State and Washington State among others this summer. He's received offers from the Cougars, Stanford, Idaho, and Eastern Washington. But will any of those schools have big brother Kellen throwing him the ball? We didn't think so.

The first 12-0 prediction for Boise State [Coaches hot seat]
If it happens, might Coach Pete leave? Perish the thought!

More on the discussion of PAC-10 expansion [fanblogs]
Not that we care anymore now that BSU is out of the picture.