Share All sharing options for: Tuesday: Links with patience 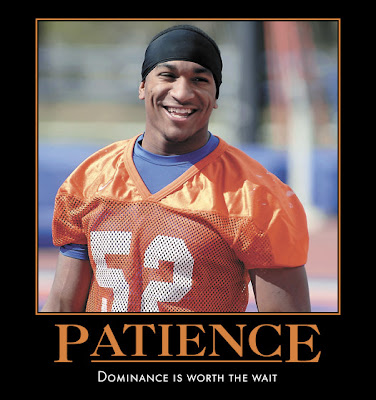 
Once again, the greatest D-1 moment in Boise State history is having its value determined by ESPN.com visitors. The Worldwide Leader has a poll up right now to decide the best BCS bowl game, as part of their week-long look at the non-playoff system.

During its first decade of existence, the BCS provided many memorable games that had no championship implications. What college football fan can forget Boise State's trickery against Oklahoma in the 2007 Fiesta Bowl or Michigan edging Alabama in overtime in the 2000 Orange Bowl?

We're a little upset that they even put a game like Michigan-Alabama in the same sentence as the Fiesta Bowl. In fact, other than the peak of Vince Young's career in the Rose Bowl versus USC, there are no other serious contenders in this group of games. There really shouldn't even be a discussion.

Regardless, we voted at least seventeen times last night.

ESPN.com writer is an idiot [ESPN.com]
The Fiesta Bowl as the third-best BCS game? Get real.

Montana State expanding stadium [Dailey's Bottom Line]
Is it wrong to be jealous of a 1-AA school?

Boise State in the H-Bowl again?! [College Football News]
Being the fourth alternate for the New Mexico Bowl doesn't make things any better.