Share All sharing options for: Tuesday: Links with Engagement 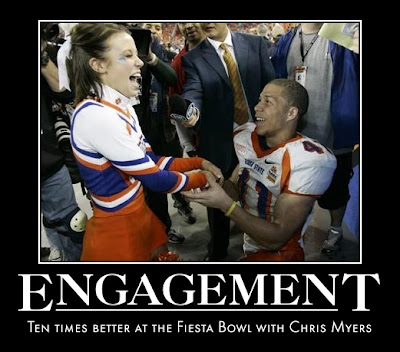 Non-BCS players to watch in 2008 [In the Bleachers]

We found this story interesting not only because it provides a handy guide to some potentially exciting players, but it also has a level-headed, sensible approach to the preseason WAC race.

After a quiet year in 2007 expect Johnson and Boise State to make another run in the WAC, where the departure of Colt Brennan and June Jones at Hawaii has suddenly left the conference wide open.

It sure is nice not having someone hand the title to Fresno State right away.

Ian Johnson is the lone BSU representative on the list, and he joins three other WAC players to watch. Not surprisingly, no Vandals were mentioned.

Tadman in Jets camp [Idaho Statesman]
Oh, really, Statesman? It's about time you mentioned this. And thanks for not citing us as a source. Again.

Relating popular bands to their college team similes [Fight Fight BSU]
Conspicuously absent is Utah State. They always came across as a Scrantonicity to us.

Another case for Kellen Moore [Bleacher Report]
Written by Michael Hroma, which is probably an alias for Jeff Caves.

Scandrick impresses in Cowboys camp [Idaho Statesman]
The blogs have already hit on this, but we guess its not news until a newspaper covers it.